Our memories sometimes work against us. Recollections of dates, times, and names fade with each passing moment. Erasing painful images or pretending oppression does not exist will not eradicate social injustice. Feigning that inequity and bias do not exist will not inherently make them disappear. To promote a more just society, we need to acknowledge our outrage and pain, both personal and collective, precisely because we don’t want any unjust act to pass unrecorded. As an artist, I hope to contribute my own voice to our struggle by creating something visual. It could be a record, a document, or an image, but my art always calls attention to these important moments of our anguished history.

As a photographer, I make quick decisions on whether to record the faces of anger, loss, and pain, or to consider others ways to visually tell the story. Whether it’s a makeshift memorial left near the site of Michael Brown’s fatal shooting, or the heartfelt actions of protesters in downtown Los Angeles, my recent project has been an attempt to create a visual record of something very real. 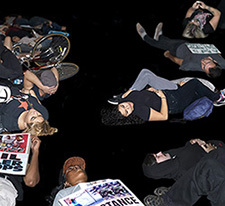 Through my academic and artistic work at Scripps College these past 20 years, I have explored the complexities of race and racial identity. I have traveled to follow the individuals who come together to condemn oppressive acts committed against marginalized communities. I document their courageous outrage through my lens. But, just as frequently, I visit sites where unjust acts occurred years ago because I do not want these places to languish in our collective chapter of forgotten history. In the past few weeks, I flew to Ferguson, Missouri to take photos of the spot where Michael Brown took his last breath. Makeshift memorials have popped up near the spot where a white police officer fatally shot Brown, an African American man who was unarmed at the time of his death.

I joined protesters in Los Angeles to record those who gathered outside of the downtown headquarters of the Los Angeles Police Department to register their outrage over the shooting death of Ezell Ford, another African American man who also died after police officers shot him — with at least one shooting him in the back. Ford’s death has resonated throughout Los Angeles because many of us know and understand his story. Latinos, Asian Americans, African Americans, whites — we know Ezell Ford’s story. We know Michael Brown’s story. I visited the street where Omar Abrego, a 37-year-old father of three, was pulled over near 69th and Main Street in Los Angeles, and who, according to family members, was beaten by police. Abrego died about 12 hours after the incident. We, as a nation, mourn collectively that their lives were cut short. 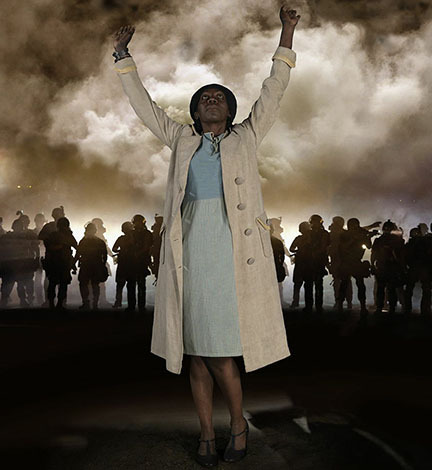 As an artist, I am very interested in the question of historical memory and how things are remembered -or forgotten — and how people and places are often conveniently erased from our collective memory. I believe these deaths matter to all of us. In the eloquent words of Martin Luther King, Jr., “Injustice anywhere is a threat to justice everywhere.” Remembering Ezell Ford, Michael Brown, and Omar Abrego, and the crowds of people who gathered to protest the deaths of these men requires all of us to question why they died at the hands of police, and to recognize these are only the latest examples in a long, turbulent history of racial strife which has shaped — and continues to shape — this nation. Perhaps amid so many conflicted and conflicting accounts, a picture may still be worth a thousand words. 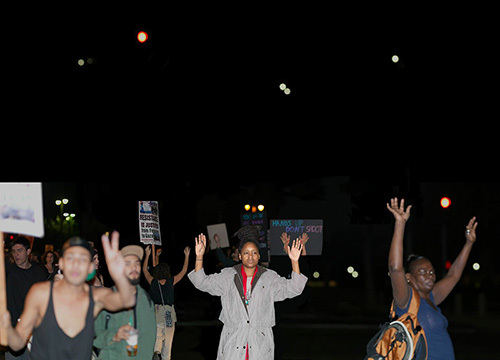