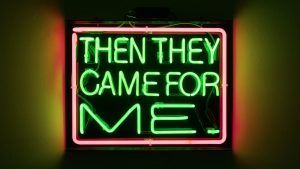 Excerpt of statement by Ken Gonzales-Day:

“One of President Trump’s first acts was to install a portrait of Andrew Jackson in the Oval Office of the White House. Then, Trump made a pilgrimage to Jackson’s tomb in Nashville. But worst of all, Trump is using Jackson to target brown people.

Andrew Jackson was the President that got the US Congress to pass the Indian Removal Act of 1830. It “allowed” the government to break numerous treaties and displaced tens of thousands of Native Americans. The death march it produced was called The Trail of Tears, and within seven years more than 45,000 Indians from southeastern states had been “removed.” This opened 25 million acres for white settlement, and, most importantly for southern whites, it created a need for more black slaves and sowed the seeds for the Civil War.

Ending DACA will be Donald Trump’s Trail of Tears when he forces American children who lack documentation to a country they may not remember, and more importantly it breaks up families. Breaking up of families was a central component of slavery because it diminished individuals and communities and kept people of color from being seen, or seeing themselves, as equal to whites.

Latinos and Hispanics can be of any race but many Latinx persons have indigenous ancestors from the Aztec to the Apaches. Some of my own ancestors arrived from Mexico 14 generations ago, in the 17th century, and yet growing up I was regularly called a “spic,” “a wet back,” and a “beaner,” so it is important to remember that targeting DACA students is just another way of keeping Latinx people from seeing their own growing numbers as a political, economic, and cultural force that can no longer be denied.”