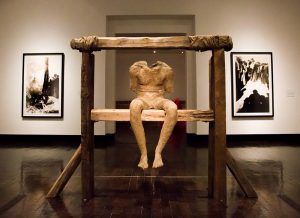 “Ken Gonzales-Day bears witness to the history of lynching in 19th and 20th century America. Part of a gallery wall is covered with vintage photographs and postcards(!) in which the victims’ bodies are eliminated and we see only the onlookers. In one manipulated photograph, a circle of onlookers looks at a blank space where the hanged and burned body would be. Some of them are children. In another, well-dressed men gaze at the embers of a fire, another lynch-and-burn scenario without a body, only wisps of smoke.”