A Collaboration with Avram Finkelstein and David Zinn and Part of Playwrights Horizons’ Lighthouse Project, the Organization’s New Public Art Series Reimagines Its Dormant Building as a Site for Exploration and Disruption

New York, NY: Playwrights Horizons (Adam Greenfield, Artistic Director; Leslie Marcus, Managing Director) continues their new Public Art Series—the inaugural initiative in the organization’s Lighthouse Project—with an installation of images by Ken Gonzales-Day, whose photography illuminates how difference, otherness, and identity emerge through acts of seeing. The two large-scale photographs that take over the Playwrights Horizons facade from March 1-April 5 belong to Gonzales-Day’s Profiled project, which places sculptures of human figures from Asia, Colombia, Japan, Mexico, Northern Europe, Singapore, and the United States in unexpected encounters with one another. Using digital editing software, he experiments with absence, juxtaposition, and context—his photographs of historical artifacts revealing the constructedness of racial categories and hierarchies. These likenesses invite us to reckon with our definitions and representations of beauty and race, from wherever we stand as the viewer.

Gonzales-Day’s Profiled project began when the artist was in residence at Los Angeles’ J. Paul Getty Museum. There, he noticed school groups consistently running past sculptural busts without stopping—bypassing, daily, the stoic faces that reflect the chiseling of race (and other constructs of power) into our social, psychological, and political worlds across time.

This work would become a decade-long project, taking him into the vaults of museums around the world to capture portraits of his unmoving subjects—and the ways sculpture both emulated societal conceptions of race and helped calcify them. He writes, “I wanted to explore the ways that misconceptions found their way into works of art, and by extension, the museum throughout the 19th and 20th centuries. I hoped my research might help me to better understand how historical models of bias and discrimination continue to resurface in contemporary culture — from police shootings and racial profiling to attitudes about immigration, gender equity, and other aspects of human difference.”

In the Profiled series, Gonzales-Day recontextualized sculptures by putting them in conversation only with other sculptures— and the fraught spaces between them. Not dissimilar to theater, his Profiled works tell complex, socially layered stories by simply placing human figures together across empty space. Gonzales-Day describes, “I wanted to take these existing objects and give them a voice, a chance to be in dialogue with us and with each other across time. They’re from different periods, they’re from different places, some are identified, some are unidentified, which speaks to questions of who has a voice and who is denied a voice, who is represented and who is denied representation. By placing these objects across from one another, often separated by an expansive, subjective space, the work asks how difference—cultural, racial, gender—functions for us. How can we transform ourselves from being static, immoveable, ideologically bound figures to living, breathing, empathetic individuals who can reach across vast distances?”

Playwrights Horizons’ public art series began in January 2021 with new work by street and subway artist Jilly Ballistic. This initiative, conceived and organized by artist, activist, and writer Avram Finkelstein and two-time Tony-winning set and costume designer David Zinn (Playwrights: Hir, The Flick, Circle MIrror Transformation), amplifies the aims shared by visual artists and theater-makers to pursue social transformation and disrupt our routine patterns to reawaken our awareness. Following Ken Gonzales-Day’s installation, it will feature the work of Dread Scott, and other artists to be announced. The series inaugurated Playwrights Horizons’ recently announced Lighthouse Project, an eclectic series that, through performances, installations, and events, aims to stretch the definition of playwriting and how a theater building can be used. On March 3, there will be a Lighthouse Talks event at 7pm with Ken Gonzales-Day, director Lileana Blain-Cruz, and theater designer Clint Ramos—about perspective, representation, and curation via juxtaposition—moderated by Playwrights Horizons Associate Artistic Director Natasha Sinha.

In addition to this new public art series, Lighthouse will include collaborations with groundbreaking performance groups citywide, offering live events, digital events, print pieces, workshops and concerts: a list that will grow over time, as the theater seeks to expand the use of its building by an ever-growing range of artists. Beyond the installation series, the program’s initial offerings will include collaborations with dance-theater-media company raja feather kelly | the feath3r theory, podcast play company The Parsnip Ship, and playwright Branden Jacobs-Jenkins.

Avram Finkelstein is an artist, writer and curator, and a founding member of the Silence=Death and Gran Fury collectives. He has work in the permanent collections of MoMA, The Whitney, The New Museum and The Brooklyn Museum. He is featured in the artist oral history project at the Smithsonian’s Archives of American Art, and his book for UC Press, After Silence: A History of AIDS Through its Images was nominated for an International Center Of Photography Infinity Award in Critical Writing And Research. He has been interviewed by The New York Times, Frieze, Artforum, and Interview, and spoken at Harvard, Yale, Columbia, and NYU.

David Zinn is a theater designer whose work on Broadway includes set and costume design for The Boys In The Band, Spongebob Squarepants, The Last Ship, Amelie and Fun Home; set design for Diana, Torch Song and The Humans; and the costume design for A Doll’s House Part 2, Airline Highway, and Xanadu. Off Broadway he’s worked at Playwrights Horizons, New York Theater Workshop, Second Stage, Manhattan Theatre Club, the Vineyard, MCC and the Public, and took his New York designs for The Humans, Fun Home, and The Flick to the UK. David has received Tony, Drama Desk, Lortel and Obie awards for his work.

Playwrights Horizons is dedicated to cultivating the most important American playwrights, composers, and lyricists, as well as developing and producing their bold new plays and musicals. Adam Greenfield became Artistic Director in 2020; Leslie Marcus has served as Managing Director since 1993. As it enters its 50th anniversary season, Playwrights builds upon its diverse and renowned body of work, counting 400 writers among its artistic roster. In addition to its onstage work each season, Playwrights’ singular commitment to nurturing American theater artists guides all of the institution’s multifaceted initiatives: our acclaimed New Works Lab, a robust commissioning program, an innovative curriculum at its Theater School, and more. Robert Moss founded Playwrights in 1971 and cemented the mission that continues to guide the institution today. André Bishop served as Artistic Director from 1981–1992. Don Scardino succeeded him and served until 1996. Tim Sanford, the organization’s longest-serving Artistic Director, held the position from 1996-2020. Over its 50-year history, Playwrights has been recognized with numerous awards and honors, including seven Pulitzer Prizes, 13 Tony Awards, and 47 Obie Awards. 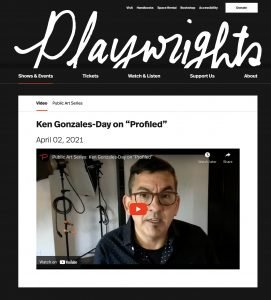 More information on the series at Playwrights Horizons

to read about in Broadway World