Under the above slogan, three days after Mexico’s national holiday, we opened at Zachęta a large presentation of the work of contemporary artists based in Mexico City, Guadalajara, Monterrey, Tijuana, San Diego, and Los Angeles. Since the late 1990s, Mexican art has (again) been enjoying great success in the world. Also the Polish audience had a chance in the recent years to see the works of a number of contemporary artists from Mexico. Viva Mexico! presents the work of thirty nine artists or groups from the middle and young generations. Because parts of southern US used to be northern Mexico in the past, and because they have traditionally been an area of strong Mexican immigration, I also invited artists from California, where the percentage of the Latino population is higher than anywhere else in the US.

Many of the featured works contain references to local history and artistic tradition: Máximo González tells the bloody story of the conquest of Latin America, Ken Gonzales-Day investigates lynchings of Latinos in California during the Wild West era, Artemio Rodríguez revives the local wood-carving tradition in new socio-cultural contexts. Maria Alós’s work (an installation, and a workshop with Warsaw children and their parents) commemorates Mexican conceptual artists. 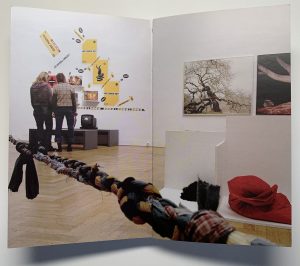 One of the most frequent topics are social and political issues. Gustavo Artigas’s video installation Ball Game was made in collaboration with a Chicago-based organisation working with atrisk youth. Thanks to the simple trick of repositioning the basket, the game of basketball starts to resemble the ancient Aztec ball game, and the young Latino players gain the sense of belonging to a glorious past. The documentation, presented by Claudia Fernández, of Proyecto Meteoros, an organisation working with street children in Mexico, shows that some artists are strongly involved in social activism.

The motif of the physical and metaphorical frontier between the poor world and the rich one, as well as the issues of social injustice and violence, are present in the works of many of the Tijuana and San Diego-based artists. Javier Ramírez Limón’s photographic series Altar Desert shows a beautiful landscape that hides grim mysteries of the borderland. The main prop of the artistic action carried out during the exhibition’s opening by the Monterrey-based duo MarcelayGina was a rope braided with clothes collected from homeless people. Sergio de la Torre’s film Maquillapolis tells stories of women working in abusive conditions in the maquiladoras, the low-pay manufacturing and assembly plants located near the US border. Dressed in a spacesuit, Felipe Zúñiga takes us on a trip along the (in)famous wall separating Tijuana from San Diego. The atmosphere of a divided city is captured aptly by Nahomi Ximénez’s installation The Invisible Border, and by the works of the young poet Omar Pimenta. Targets (The Clock), an installation by Daniel Ruanova, speaks of living in a state of danger, and Yoshua Okon, in his video installation Lago Bolsena, combats the stereotype of Mexico as a dangerous country. The fascinating history and contemporary life of the borderland are presented in a humorous way in Frontierland, a film by Rubén Ortiz Torres and Jessy Lerner.

Films, publications, and music from the melting pot of Tijuana are presented in a separate room. The Tijuana-based group TOROLAB is known for its projects aimed at making people’s lives better. In Warsaw, TOROLAB carried out an action from the COMA series – treating the audience with tasty Mexican dishes and offering advice on healthy cooking. Architect Giacomo Castagnola, in turn, shows a project called Micropark, which introduces greenery to the crowded urban landscape of Tijuana. Damián Ortega presents two works devoted to one of Mexico’s cult objects – the Volkswagen Beetle. A sculptural decomposition of the car and a 16-mm film pay homage to an important element of the local iconosphere. Robén Ochoa of Los Angeles shows a contemporary version of the highway-dominated Californian landscape. Scolia Acosta’s collages have been inspired by LA murals. Mely Barragán offers a humorous glorification of Tijuana’s raw beauty and flavour with her sculptural installation using discarded car parts collected alongside the local roads, in a reference to the local tradition of building publicity sculptures with them.

Movie aficionado Julio Orozco’s installation The Bit of Death speaks about the genre of pop cinema specific for the borderland, and his Past Cinemas, Future Projections nostalgic installation is a homage to the old style of making and watching movies. Gabriel Boils is fascinated with the world of pop music, local tradition and fiesta culture, and this fascination is reflected in his film Caballo dorado. Javier Ramírez Limón’s photographic series Mexican Quinceanera captures the atmosphere of an important local feast. Yvonne Venegas, in turn, presents in Rebelde scenes from the life of a local pop star (singer and actress) and the devotion of her fans. Lourdes Grobet, long fascinated with the world of Mexican wrestling (lucha libre), shows the photographic portraits of several of the top stars of this discipline, which blends sport with performance.

The connection between the world of music and the visual arts is very powerful in Mexico. The Mexico City-based collective Nuevos Ricos, featuring visual artists and some of the city’s most progressive music bands, and led by Carlos Amorales (design), André Pahl (animation), and Julian Lede-Silverio (music), invited the Warsaw street art group MASSMIX and audience to co-create their exposition. The exhibition’s opening was accompanied by Silverio’s show at Warsaw’s music club CDQ. In Daniel Guzmán’s drawings and films presented in the exhibition, there are emphatic references to music, whereas Rubén Ortiz Torres’s black-and-white photographs and drawings form a collective portrait of Mexico’s punk generation, blending counterculture motifs with personal narratives.

The main inspiration for Jorge Méndez Blake from Guadalajara is literature. The presented mural, designed specially for Zachęta, was inspired by the novel of Jules Verne. The films of Gonzalo Lebrija bring poetry out of seemingly ordinary fragments of reality. In Zachęta, the artist presents three pieces that subtly refer to Mexico’s Spanish past and its present day. Augusto Marban, in turn, makes films that notice the grotesque in the banal. Gabriela Galván finds the inspiration for her drawings and installations in the world of objects and colours around her, drawing freely from the tradition of abstract art, pop aesthetics, and the world of children. In Warsaw, she presents a wall composition formed with elements collected in advance as well as those found in Warsaw.

Tijuana has a sizeable community of woman artists whose work explores feminine issues, challenging the country’s dominant macho culture. Irma Sofia Poeter shows a sculptural composition called The Three Non-Graces. Tania Candiani opposes the model of female beauty promoted by the dominant culture, showing a fabric relief entitled Lipo-front. Candiani is a feminist who puts on a colander helmet for battle. Of seemingly ironic nature is her sculptural installation – a percussion set with pots instead of drums – signifying women’s entry into areas previously reserved for men. Alida Cervantes presents painted selfportraits in which she depicts herself in various roles: a good woman (a housewife?), a beach beauty, and a poor rich girl.

Carlos Amorales’s Useless Wonder – a grim animation shown in the form of a video projection, as well as Miguel Calderón’s highly suggestive video installation The Enemy’s Steps (both authors live and work in Mexico) draw inspiration from the authors’ subjective experiences, their subconsciousness, reflecting the dark side of the human soul. Claudia Fernández’s bitterly humorous films speak about the human need of empathy and closeness.

Pedro Reyes, whose work combines the visual arts, design, and sociology, decided to see whether the Polish public is temperamental – he proposed a game of ‘kissing with a stranger’ (the installation Peruvian Door). Gabriel Kuri shows a series of objects called Speculations – sculptures resembling business charts that describe the world’s present condition by analysing the objects inhabiting it.

Héctor Zamora prepared an installation specially for the Zachęta show that fits perfectly well with the gallery building’s impressive lobby – handing it into the possession of the natural world, and, more precisely, parasites (Fern’s Full Invasion). Miguel Calderon presents a series of photographs commemorating, in classical form, the last days of the open-air market on the crown of Warsaw’s Decennial Stadium.