Unseen: Our Past in a New Light Ken Gonzales-Day and Titus Kaphar

The early history of portraiture in the United States, from the country’s founding to the advent of photography in 1839, favored white men who owned land and could vote. Similar to developments in Europe, portraiture in America originated as an art form to affirm social status. The relatively few women and people of color depicted in portraits were almost always affiliated with powerful men or deemed extraordinary for having transcended gender or race constrictions. On the occasion of the National Portrait Gallery’s 50th anniversary, Unseen: Our Past in a New Light considers the intersections between portraiture, nation building, and museum practice. Featuring the work of Ken Gonzales-Day (born 1964) and Titus Kaphar (born 1976), the exhibition illuminates how, in the process of constructing a new republic, communities of color were routinely left out of the picture. Gonzales-Day photographs historical objects, be they from archives or museums, and suggests new meanings for them by thoughtfully altering their composition or display. Kaphar, meanwhile, paints in the tradition of Euro-American colonial portraiture but then adds a contemporary layer that is often physical, such as cutting, shrouding, or smearing the canvas. Through vastly different approaches, both Kaphar and Gonzales-Day probe foundational myths to reclaim a space for those left “unseen.” 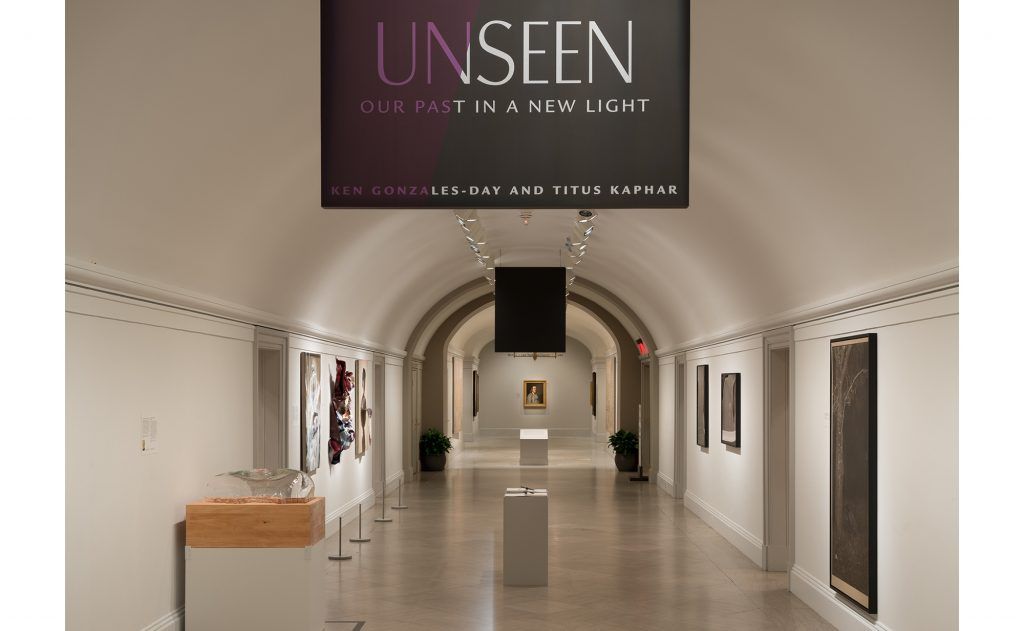 The proverb “out of sight, out of mind” refers to the relation between perception, memory, and value. What does not enter the field of representation will neither be recognized, nor missed. Yet, the adage also points to a sense of latency, a presence that is not manifest but is one that could be.

For over two decades, this latency has been fertile ground for Ken Gonzales-Day. Through research and visual analysis, he scrutinizes histor­ical narratives and the absence of people of color therein. Two questions, How has absence become factual? and How have we been taught to see? reveal the schism between vision as a biomechanical function and as an interpretive one. Our eyes take in everything, while our minds create facts through selection and conditioning. 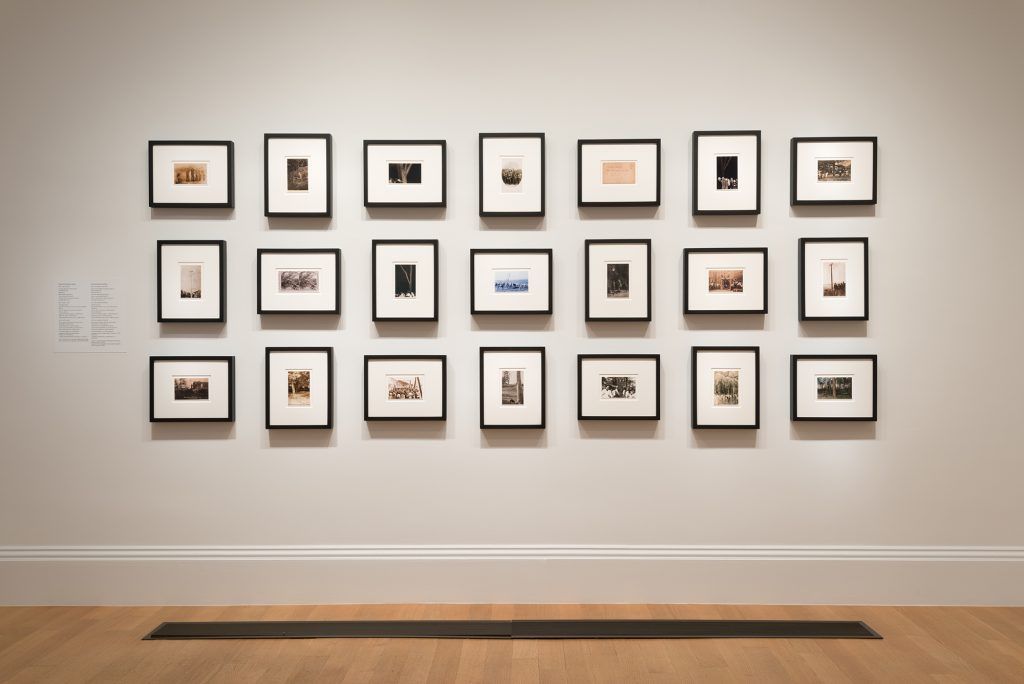 UnSeen: Our Past in a New Light features works by Gonzales-Day that use photography as “a mindful eye” to examine invisibility. The series Erased Lynching-in a gallery titled “Absence”-comprises a collection of images teeming with people. Men in hats, perplexed children, and grinning soldiers gather in daylight or at night, in arid landscapes or against lush backdrops. Many of them stand by a tree, hinting at the sinister narrative thread. The series derives from photographs of lynchings that took place in the United States between 1850 and 1942. The artist re-photographed these images, which were once sold as souvenirs and mailed as postcards, and used editing software to remove the victims from the compositions. Rather than inflicting more violence upon these central subjects, Gonzales-Day directs our attention to the perpe­trators and bystanders. 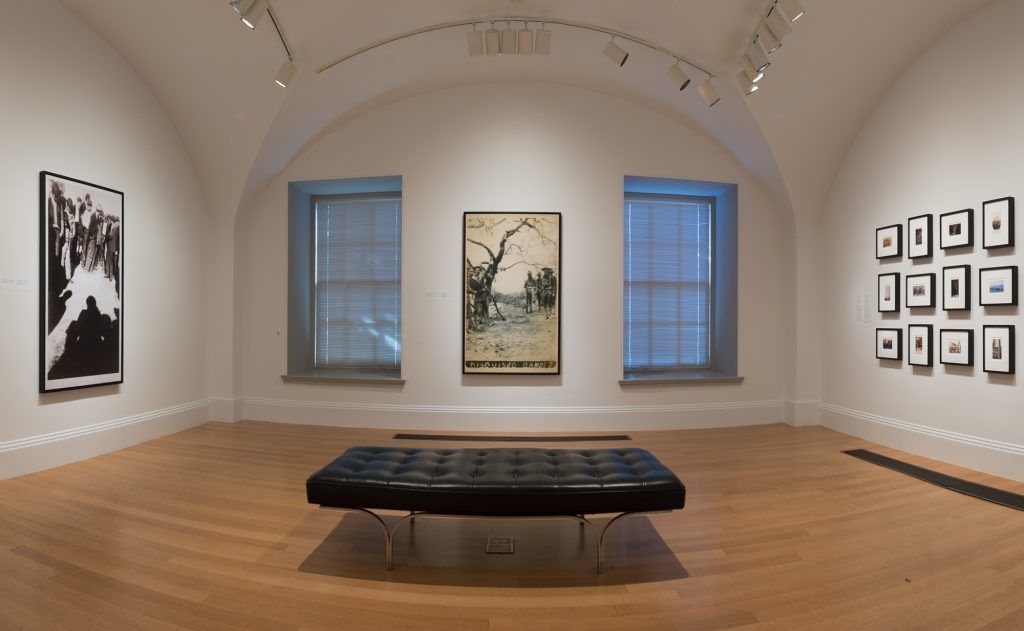 Most lynching victims in the United States were African Americans who lived in Southern states during the Reconstruction and Jim Crow eras, but the phenomenon of this racial violence is older, harking back to the expansion of the country’s Western frontier. In his book Lynching in the West: 7850-7935 (2006), Gonzales-Day sheds light on this lesser-known history, uncovering 350 cases of lynching in California, a state where only 32 cases had previously been identified. Forty percent of those lynched in California, he notes, were Mexican; other victims included Native Americans and Chinese immigrants. 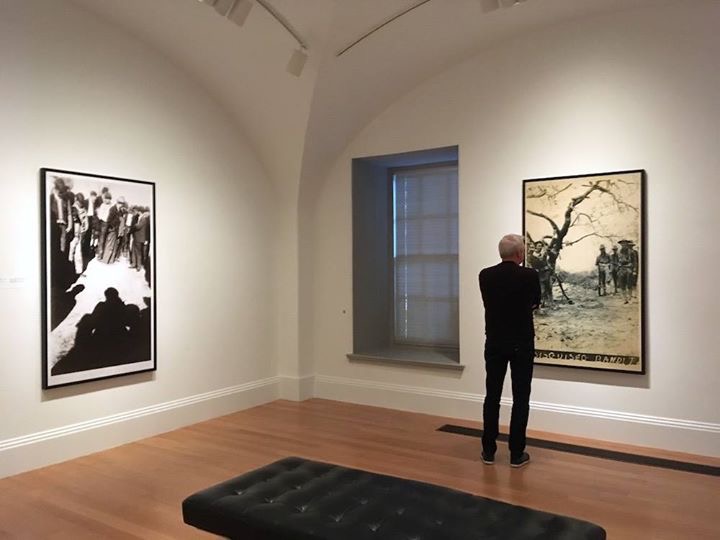 The galleries “Distance” and “Naming” feature a selection of works from Gonzales-Day’s series Profiled, which he began in 2008 when he was a visiting scholar at the Getty Research Institute. For this body of work, Gonzales-Day photographs figurative sculptures in prominent museum collec­tions to elucidate how the collecting and display of objects have shaped ideas of whiteness, race, and otherness. Over the past decade, he has created encounters between various sculptures through digitally crafting group compositions or setting up juxtapositions. 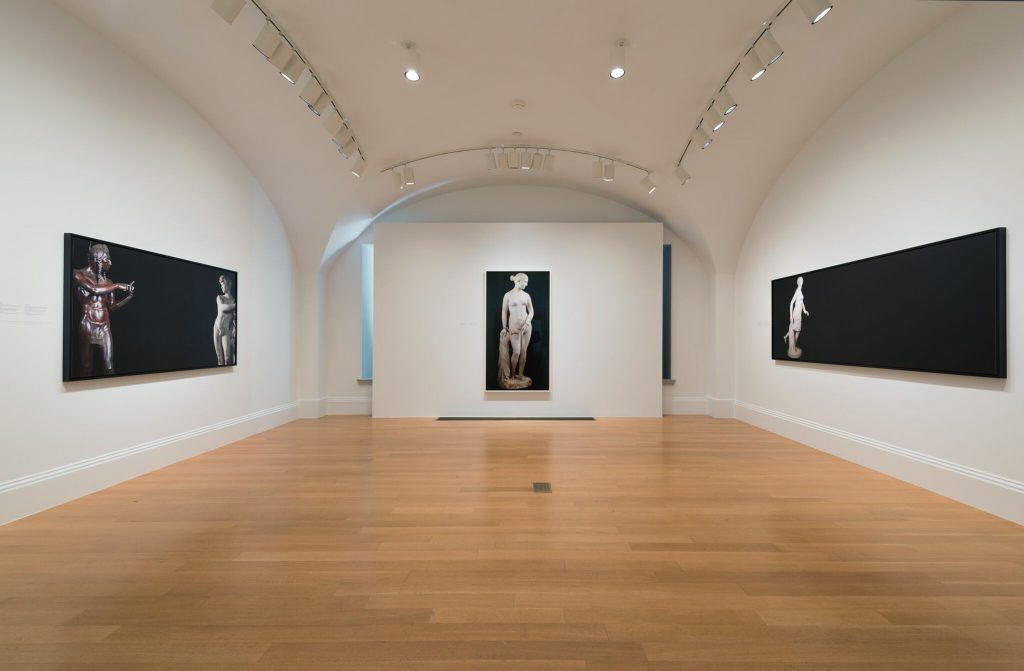 For example, one work in the series places the likeness of eighteenth-century aristocrat Adela”i”de Julie-Mirleau de Neuville, nee Garnier, across from another bust that is simply labeled “African woman,” a testimony to Western art’s generalized treatment of black individuals during the nine­teenth century. The photos possess beauty and darkness; they shed light on the distance between artistic treatments and interpretations of white bodies versus bodies of color, and they reveal the historical role of museums in constructing racial hierarchies. 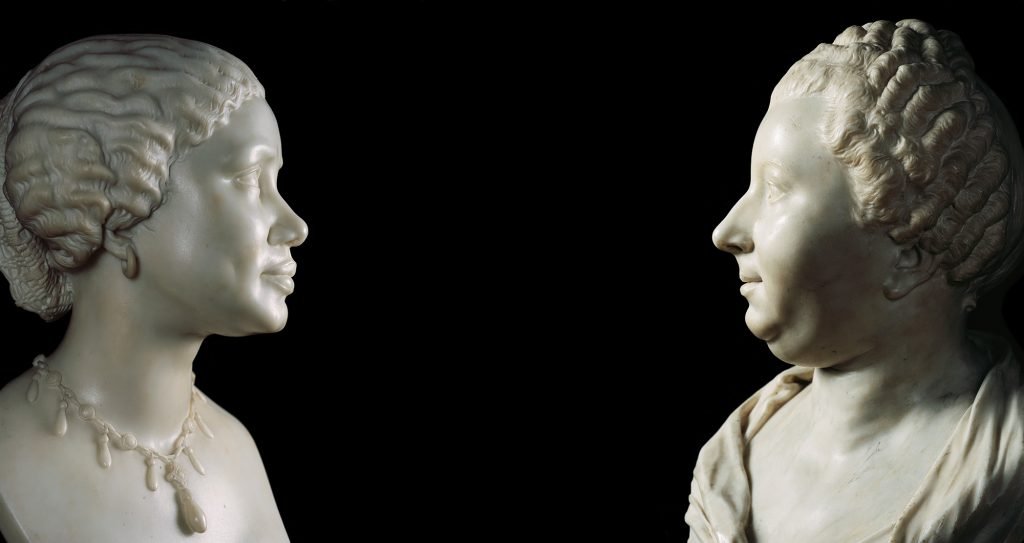 Finally, the gallery “Naming” presents face-to-­face meetings between established individuals in our national history and unacknowledged subjects. In the display of originally forgotten plaster busts of Native Americans, collected a century ago by Smithsonian anthropologists to represent their racial variety, absence loses its apparent innocence as harmless oversight or unequivocal truth. The Osage warrior Shun­ka-moh-/ah (?-1919), the Oglala leader Mahpiya Naji() (Standing Cloud; c. 1839-1910), “Gives to the Poor,” a member of the Pawnee Scout Military Battalion, Seneca, and US Navy Seaman William L. Snow (c. 1872-1919), contrast with the plaster busts of Abraham Lincoln, Winfield Scott, and Asa Gray, among others, all in the collection of the National Portrait Gallery. At the center of this dichotomy between being an agent of history and serving as a research object, Gonzales-Day places a photograph of the allegorical sculpture America by Hiram Powers. Seen from behind, she seems to rebuff history’s neglect of brown and black people. Now that the formerly invisible are in sight, and in mind, she waits for their names to be reinscribed in history, and for equality and justice to flourish.

1 thought on “National Portrait Gallery: Unseen – Our Past in a New Light”