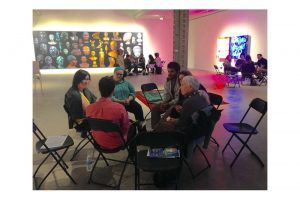 “The election of President Obama in 2008 and re-election in 2012 marked the emergence of a new period in race relations and identity politics in the United States. One in which significant advancements underscore deeper, more persistent ruptures in the skin that binds us as Americans. President Obama, from a multiracial family, represented the most potent and singular figure for the progress made by the civil rights movement, multiculturalism, and identity politics from the previous decades. Some even argued that his election marked the moment of post-racism in the country’s history. And yet, since election, numerous racialized incidents have occurred that tell a different story. The exhibition SKIN brings thirty-six artists whose work is timely and engaged in many ways with these broader debates. The gallery acts as a discursive space where these disparate conversations can have a platform, and where further productive work and reflection on these topics can proceed.