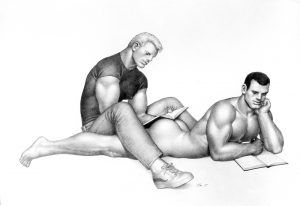 “Touko Laaksonen (8 May 1920- 7 November 1991) was born and raised in the village of Kaarina, Finland. In 1939 he moved to Helsinki to study advertising, and in his spare time began to create erotic drawings of sailors, policemen, lumberjacks, and working class laborers.  His time in the big city was short lived, and in 1940 he was conscripted into the Finnish Army. After World War II, Laaksonen returned to Helsinki, and added uniformed military men to his growing homoerotic repertoire. In 1953 he met Veli, the man with whom he would live for the next 28 years. In 1957, his drawings of a shirtless lumberjack with bulging muscles and a pompadour appeared on the cover of an American fitness magazine called Physique Pictorial. Like many of the illustrators and photographers for such “fitness” magazines, Laaksonen choose to take on a pseudonym and “Tom of Finland” was born.  In Finland, Homosexuality was criminal until 1971, and considered an illness until 1981…”