I began working with Taína Caragol, Ph.D.,Curator of painting and sculpture & Latino art and history, at the Smithsonian National Portrait Gallery as a part of a SARF fellowship in 2014. I was greatly interested in photographing sculptural depictions of First Nations peoples in our national museums as a way of thinking about displacement, absence, loss, whiteness, colonialism, and racial formation in the United States.
I was able to photograph many sculptural objects in several museums of the Smithsonian, including this work, which is in the collection of the National Museum of Natural History. Shonke Mon-thi^ (? – 1919) was in important leader who visited Washington D.C. on behalf of the Osage people. It was on February 04, 1094 on a trip to Washington that he was photographed by T.W. (Thomas William) Smillie (1843-1917).  A sculptural bust in plaster was cast by Frank Lemon for display at the National Museum of Natural History. It is unclear if the bust was made from this photograph or from a life cast.
After several years of thoughtful negotiation and a major exhibition of my photographic work, the photograph was acquired by the National Portrait Gallery which has made efforts to imagine a more inclusive NPG. It is important to note that it was only by working with Taína, and others at the National Museum of Natural History, that we were able to share information on this work with the Osage people.  Perhaps most importantly, we are now able, as a result of the help from Shonke Mon-thi^’s decendents, to finally correct the name of this important Osage leader in a National museum.
To read article in Osage News 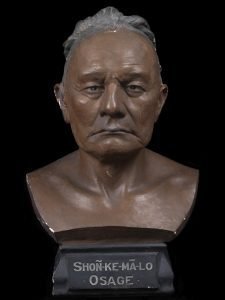