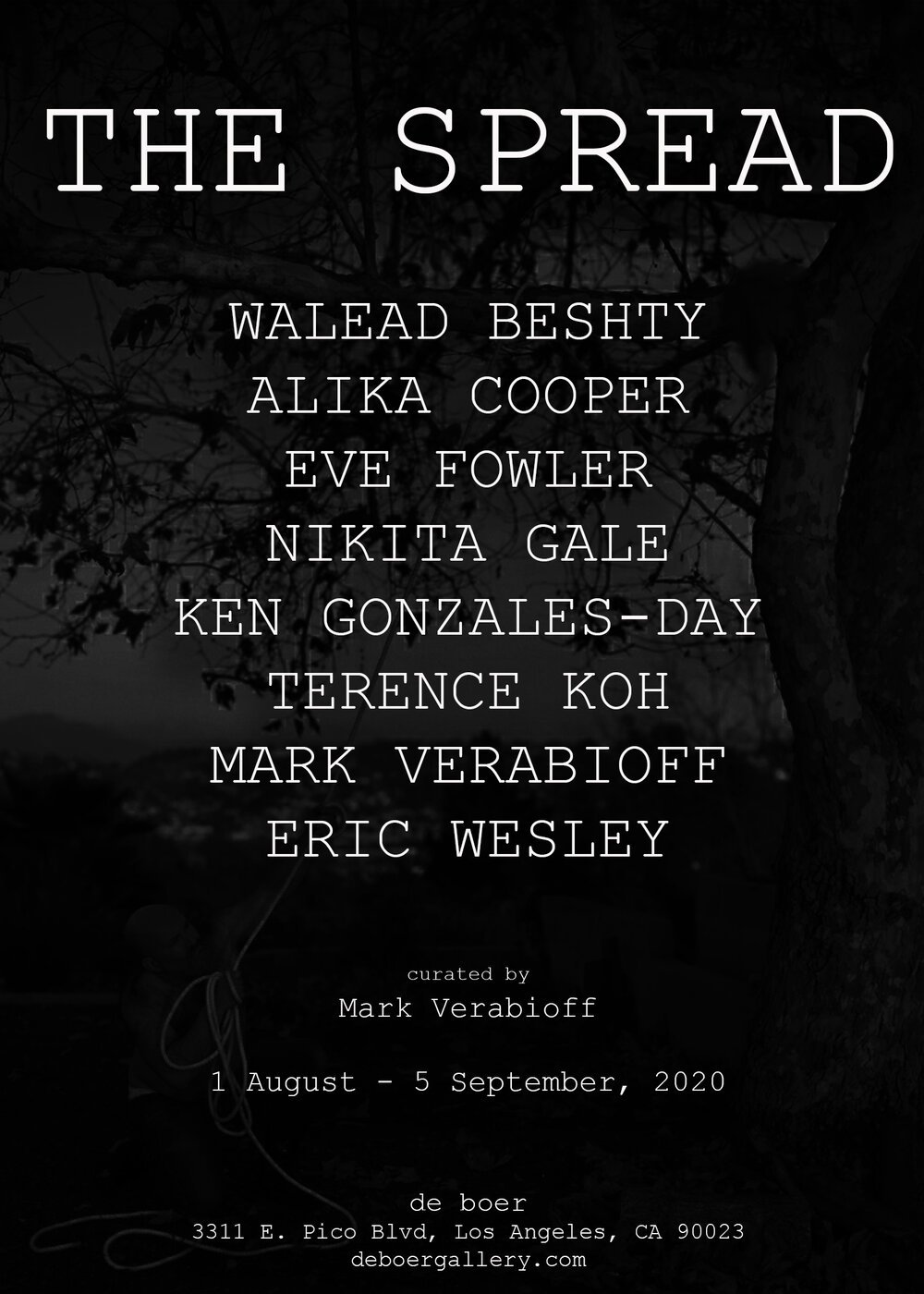 THE SPREAD, which explores themes of civil war, protest, cultural and racial insurgency, climate change and sanctioned travel will follow a similar logic to Verabioff’s installations to disrupt the authority associated with authorship by acknowledging the complex interplay between object, creator, viewing context and audience through the lens of queer feminist discourse.

Nikita Gale’s practice is often structured by long-term obsessions with specific objects and the ways these objects gesture towards particular social and political histories. For this exhibition Gale’s signature barricade sculptures straddle Mark Verabioff’s ‘fascist bros.’ A picture by Walead Beshty of himself absurdly inserted into display architecture takes on new meaning today with the crusade of gouty Anti-maskers to ‘Party America’ while others have their heads in the sand. Ken Gonzales-Day took his contribution and participation within the context of this group exhibition as both experimental and site-specific to show a photograph that’s never been given the opportunity to be publicly on display. Eve Fowler’s text-based paintings of comfort and love perpetuate ‘the difference is spreading.’ The bronze bathing suit sculptures of Alika Cooper have resemblance of being peeled off the body and flung to the floor. In the context of this exhibition Cooper’s work alludes the fantasy denial of sanctioned travel. Eric Wesley’s mood is just simply ‘fuck it’ which feels a kinship with Terence Koh’s art/life drawings of retraction from the cruel world to go back into his mother’s womb.

Giving agency and disrupting the ambiguous authority of artist-as-curator, Verabioff extends the authority of meaning to artists participating in his exhibition by providing a platform for them to speak about their work in their own words, please see these below:

Phenomenology of Shopping is my engagement with the mall structures in the dumbest way possible. That is: “Where does my body fit?” And so it does combine with the idea of détournement and dérive, always engaging directly with its object, but in an absurdist way. What the images show is my body inserted into these sets of display architecture, which are almost like pictures themselves in the sense that they‘re objects meant exclusively to be looked at. One way to deal with a façade is to put weight on it, literally. I always thought of this work as performative, because when considered solely as photographs, they really aren’t all that interesting. It was the act that structured that work.

Why monumentalize the bathing suit? The bathing suit reduces women through imagery, misogynistic imagery, and when the shrunken, fallen bathing suit is also reduced and diminished and is the opposite of monumental, it’s like a squinched up little sponge. Recording the gesture in bronze brings forth the tension between the grotesque and the playful. The body is stripped of its form, reduced to a shapeless skin, while the act of disrobing blurs agency between female and male. Turning fabric into sculpture explores the absence and representation of the female form in popular culture and challenges the use of materials classically associated with monumentalism. Present day, vacations and fantasies are canceled. People are in isolation. The obstructions against leaving/coming into America or globally, travel plans are canceled and people are at home in cancellation, thinking about their fantasy denial.

War and Order, is part of a body of work that has been ongoing for about ten years. I have used segments of writing by Gertrude Stein that have been extracted from her texts and used in audio pieces, paintings, public artworks and sculptures. What interests me most about the work is how queer and coded the language is and how that language speaks in code to welcome in anyone who may feel othered. In this particular piece, as in all of the other pieces I have made with Stein’s work, the meaning is left open to interpretation. To me it is clear that this text is a reaction to war and, at the same time, feelings generated by a personal relationship and that relationship is probably between Stein and Alice B. Toklas. I do think it’s best to leave these texts open to interpretation but my interpretation is that while the world is in upheaval a temporary comfort can be found in intimacy and love.

In thinking about the infrastructure of crowd control, I became interested in the ubiquity of barricades at protests and other large public gatherings like concerts and political rallies. Barricades have origins in a very radical material tradition, having been made out of refuse by the working classes in 19th-century France to block and redirect the flow of street traffic as a means of protecting themselves against state violence. These structures also served as social spaces and ad hoc stages for these citizen insurgents to address one another. Through the advent of mass production, barricades have become a mobile architecture that controls how crowds and audiences are allowed to take up space; they are no longer technologies of the people but technologies of authority, and the freedom to speak and to listen is negated by the physical control rendered by the barricades’ presence. CURRRVE – a maquette for a larger barricade sculpture – considers exclusion and protection, radical expression and the regulation of speech and listening.

This was one of several photographs I took of the Canadian-born artist, Mark Verabioff in a staged reenactment of a lynching from California history. The image was shot on 8 x 10 inch sheet film with an old-fashioned wooden Deardorff camera that I bought on eBay. This photograph came out of my research into the history of lynching in California and enacts the performative queer body, as part of what must be seen as a critical response to the image of whiteness. The image of whiteness was constructed and maintained through systemic reinforcement, and was clearly linked to the image of lynching and the spectacle of mass killings that took place across the Nation and resulted in the lynching deaths of over 4000 blacks, 500 Latinxs, and untold numbers of Native Americans and POC in this Nation’s history. The photograph was shot prior to the publication of my first monograph, Lynching in the West:1850-1935 (2006), which brought National attention to the lynching of Asians, blacks, Latinos, Native Americans, and others, in California. This is the first time the photograph has been exhibited.

Being stuck at home you have just as many channels of escape as going out. The medium of escape is the same whether we go to a bar and flirt with somebody or go to the Whitney. At home, when you’re about to check Instagram, try to slow down time itself and ask, Why do you want to check Instagram? Is it because you see future images of a heart, the image of love itself? An endorphin hit? I went through despair at first when my own physical show was cancelled. Do we even need art galleries anymore? Everything I want to do as an artist I’m able to do across all mediums, whether on Instagram or an online exhibition or a sculpture or a performance on Zoom or in a museum. I believe that the fundamental point of an artist, which is also the fundamental point of every human, is to open up all the possibilities for existence. A human being, I’ve discovered, is not meant to be alone so much, just like the honey bees who touch each other 3,000 times a day—their legs and antennas rubbing in all this nonverbal communication. It’s interesting what happens to a human without these senses.

The current political climate increases the chances of violent confrontations at protests and rallies. ANTIFA have expanded their definition of fascist/fascism to include not just white supremacists and other extremists, but also many conservatives and supporters of President Trump. The four page tears all bear the text ANTIFA. The women whose photographs appear in three works include Jane Fonda, Vivienne Westwood and Grace Jones, all of whom were carefully styled and lit to maximize the agreed-upon notions of beauty then in currency. Applying “ANTIFA” to these images allows the passive sitters to carry a message of resistance, stripping the women of their original “to-be-looked-at-ness” and saturating the images with political relevance. In this manner, I view these women as political, climate and cultural insurgents. The fourth page tears with the additional text of “PART-TIME” represents white male reluctance.

The sculpture titled Fuck it was produced at a time and from a place of despair, namely the United States of America, late 2010’s. Shaped of the flesh of a madrone tree (fell by the artist) the etched slogan on the guitar body gives positive affirmation to an undercurrent of depression and hopelessness felt by many. The proximity of politics draws closer as the understanding that this artwork com relic once hung in a neighboring gallery, Pio Pico, and for anecdotal reasons, became the only available… “legally” valid option for presentation at the show “spread.”

de boer is located at 3311 E. Pico Boulevard in Los Angeles. The gallery remains temporarily open by appointment only. For further images and information, please visit deboergallery.com or email the gallery at info@deboergallery.com.