On a Tuesday evening in April, Lizzie Dubose, a 27-year-old African American college student from Placerville, California, tuned into the small Gold Rush town’s City Council meeting via Zoom, as she had every two weeks since last June, and patiently waited her turn to speak. DuBose listened as City Council members approved a pavement project, considered sending a letter opposing a state bill and confirmed appointees to its economic advisory committee. By 6 p.m., what she and hundreds of others on the virtual call had been waiting for finally came before the council: the future of Placerville’s controversial rough-and-tumble identity. Up first: its city logo.

It is far from an ordinary logo. At first glance, the image can be shocking: a noose hanging from a tree above a miner digging for gold. Designed in the 1970s, the seal adorns Placerville’s official envelopes and documents, City Hall doors and street signs. Not only that, it pervades this small town, which has a population of nearly 11,000, mostly white residents. Walk down Main Street in Placerville today and you will see a plastic dummy named George draped from a noose on one of the city’s most iconic buildings, the Hangman’s Tree building. Placerville’s nickname — Hangtown — is emblazoned on government buildings and businesses up and down the quaint, Gold Rush-era road. A rainbow-colored “Hangtown” mural covers a brick wall just steps away from where George hangs.

This evening, more than 100 callers dialed in to give their final word on the controversy brewing since last June. Children as young as 11 and longtime residents as old as 73 made their voices heard. Some had been calling in for months. It was the first time for others. Most were from or lived near Placerville. The ACLU of Sacramento, California’s capital city about 30 miles west of Placerville, chimed in.

Some said they were horrified by the racist imagery invoked by nooses. Others blamed cancel culture for trying to steal the town’s history. Both sides were firmly in their camps without much of anything in between. Many said the future of the logo should go to a popular vote.

California as a whole was no stranger to lynchings during the state’s early years. Ken Gonzales-Day, a Los Angeles artist who studies lynchings in the American West, has uncovered 352 lynching occurrences in California between 1850 and 1935, the majority of which were perpetrated against Latinos, Native Americans, and Asian Americans. More Latinos were lynched in California than any other race or ethnicity, Gonzales-Day said. People of various ethnicities were killed on Placerville’s hanging tree during this period, he added. African Americans made up only 8 of the 352 lynchings in California, according to Gonzales-Day’s research. Even so, Gonzales-Day says the dark history of lynchings and nooses in America makes any display of related imagery abhorrent. “Does it matter who was killed in that particular town or who did it?” he asked. “The question is, is that a part of the legacy that we want to celebrate?” 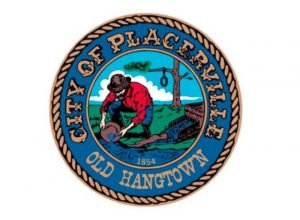