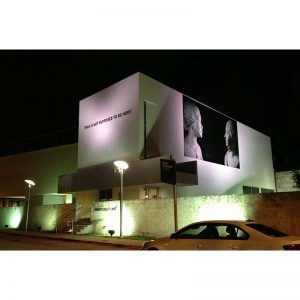 An evening many assumed would be a run of the mill art showcase turned out to be anything but, as the curators of the Bass Museum of Art had attendees marching around the building grounds, into the streets, and finally depositing the group at a gas pump.

The museum’s Temporary Contemporary exhibit, launched on November 2, combined high art with street art. Those hoping to see beauty in creative works had to look no further than a sidewalk window display in Walgreens or the TV above the gas station cafe.

The procession began around the front of the building’s courtyard just before the Beach’s skyline swirled into pastel pinks and blues. Silvia Karman Cubiñá, executive director and chief curator of Bass, provided commentary for pieces scattered around the landscape as the crowd listened attentively, even in peculiar places like the Bass’s parking lot where a billboard piece by L.A. artist, Ken Gonzalez Day, from his “Profile” series hangs in full view, almost as if to say, “You can’t ignore this.”

The piece deals with issues of art history and the way in which we perceive its subjects. “You go to a museum and see a white marble sculpture of an African woman and why is it white marble and why is there no name on it?…European American people have [their] proper names for titles,” Cubiñá said of the way historical artists named and gave valor to their original works. “He’s creating these; juxtaposing them in this conversation about art history…He did the research on who this African woman was and the work of art actually includes her full name…so he’s almost rewriting history,” Cubiñá said.