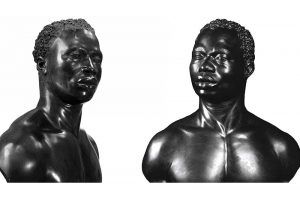 After brief introductions by GLC Director David Blight and YCBA Associate Curator of Education Cyra Levenson, Yale history professor Steven Pincus kicked off the conference by examining the life and business of university namesake Elihu Yale, and what can be learned – about slavery, merchant capitalism, political institutions, status – from his portrait with a collared servant featured in the exhibition. Agnes Lugo-Ortiz and Geoff Quilley presented slavery and slaves in Atlantic and contemporary art. Such figures were not merely art tropes; slaves and free people of color lived in Britain in the 18th century. Yale African-American studies and history professor Edward Rugemer described the black community and the laws of slavery in Britain, while Yale drama professor Joseph Roach discussed the very popular stories of slavery on the London stage in the 18th century.

Slavery’s existence in Britain, not only in its colonies, was reflected in its art, drama, literature, language, and artifacts. James Walvin and Chi-ming Yang discussed slavery in everyday and luxury products, while Vanderbilt history professor Catherine Molineux traced the development of British aesthetic responses to rise of the British slave trade. Nicole Aljoe, Saidiya Hartman, Roxann Wheeler and Nick Draper covered archives of slavery in literature, art, and history. Finally, Richard Rabinowitz, Wayne Modest, and Ken Gonzales-Day spoke about current efforts to reckon with slavery in art and history museums, and how contemporary artists use the history of slavery and objects, such as those in the exhibition, to inspire new works of art.