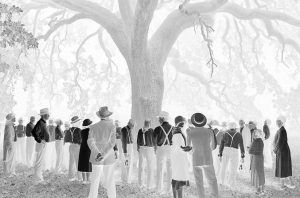 In 2001, Ken Gonzales-Day set out to write a book on Latino portraiture in 19th- and 20th- century California; his research led to his discovery of dozens of images and written records of lynching, and, ultimately, to his 2006 book Lynching in the West, 1850-1935. On view through April 16 at the Minnesota Museum of American Art, Shadowlands, which grew out of this publication, comprises his own photographs, archival images, books, and ephemera. All of this material, along with his photographs about this country’s recent racial violence, deftly compresses history and raises questions about our historic construction of race.

Lynching may be commonly thought to be a Southern, post-Civil War practice confined to African Americans. Gonzales-Day discovered otherwise. Records vary, but it is estimated that between 4,000 and 6,000 lynchings occurred in the U.S. between 1850 and 1940. In California alone, 353 lynchings are documented, of which at least one-third were Latinos. Because Native Americans, Latinos, and Chinese were recorded as Caucasian/white, exact numbers are difficult to determine nationally.

As recently as 1930, photographs of lynchings were published in newspapers and printed on postcards. In his Erased Lynching series I, Gonzales-Day re-photographed 15 of these postcards and digitally erased the victims and the ropes, focusing attention on the voyeurs. For Searching for California’s Hang Tree series, he found and photographed the actual trees used in hangings or others nearby, living traces of the past. The last recorded lynching in California, of Charles Valento, in 1920, is re-enacted in Gonzales-Day’s dramatic video Run Up. However, the hanging is not depicted, only the lynch mob.

Gonzales-Day considers erasure a metaphor for our collective amnesia about these atrocities. Even in Minnesota, few are aware that the largest mass hanging in the U.S. was that of 38 Santee Sioux Indian men in December 1862 in Mankato, Minnesota, or that the last Minnesota lynching occurred in 1920 in Duluth. Since its opening, Shadowlands has an even deeper context with the stunning public apology by LaGrange, GA, police chief Louis Dekmar for the 1940 lynching of Austin Callaway, and Carolyn Bryant Donham’s recent confession that the lynched 14-year old Emmett Till did not, in fact, accost her in 1955. The past and present are indeed compressed in Shadowlands.