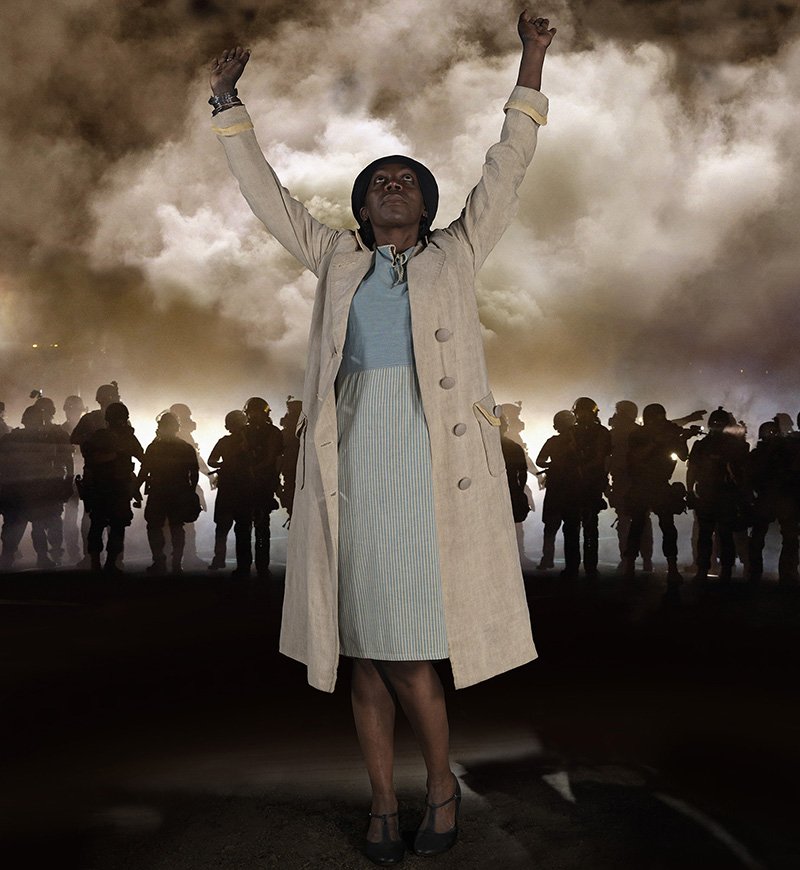 Excerpt:
“The centerpiece of Ken Gonzales-Day’s exhibition “Run Up” is a seven-minute film of the same name that presents a restaging of a lynching that occurred in Santa Rosa, CA in 1920. The latest addition to Gonzales-Day’s Erased Lynching series, Run Up is an exploration of the myriad complicities and denials among those in attendance using the documentary evidence as a point of departure. Gonzales-Day’s ongoing project has been both an academic and artistic exploration of vigilantism and lynching, specifically the lynching of Mexicans and other people of color in California as a way to reclaim their memory. The production of Run Up in 2014 coincided with the events in Ferguson, Missouri as well as other racially tinged shootings in Los Angeles, and resulted in Gonzales- Day’s desire to document the scenes of these incidents. Gonzales-Day photographed the locations of the shootings, the memorials and detritus from the ensuing violence, as well as the ongoing protests. In the exhibition, these images are combined with scenes and characters from the film, blurring the line between fact and fiction as well as past and present. Hands Up (2015), is a photograph of an African-American actor from the film holding her hands above her head, looking up toward the sky as a gesture of protest and surrender. Surrounded by smoke behind her is a row of combative police officers dressed in riot gear. Though these images were taken at different times and in different places—on set and in Ferguson—together they draw parallels between the lynchings of the past and the police shootings of the present. Gonzales-Day’s juxtapositions allude to the unfortunate ways that history repeats itself. Through the use of digital technologies he is able to enhance, erase or composite disparate images to illustrate a particular voice and point of view. Gonzales-Day is undeniably an aesthete and a romantic. His photographic images while haunting are also beautiful. As is his first film. In Run Up he immerses the viewer in multiple vantage points as the action moves inexplicably back and forth from day to night, Gonzales-Day indulges in ambiguous points of view to suggest no one can know what actually happened. The racially mixed crowd seems to represent both perpetrators and victims. Gonzales-Day fuses thorough research with cunning craft to create chilling, compelling and evocative imagery that connect events in the past to the present, tracing a lineage of racism and political unrest that continues to run rampant.”