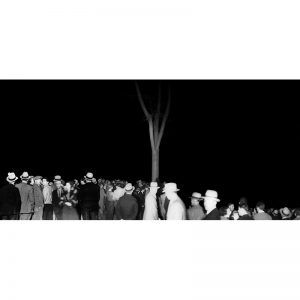 Du Bois was not alone in coming to think that lynching images could be put to reformist rather than racist ends. Leigh Raiford has detailed that anti-lynching activists in the 1910s through the 1930s released once suppressed images of lynching during the long struggle to enact a federal lynching ban. To place lynching images in the official public sphere—in downtown New York City, where the NAACP held their offices—was to co-opt their use by white people, thereby changing the conversation about lynching as well as what the images represented. In effect, Du Bois turned the tactics of whiteness against itself, showing how lynching images could function not as tools of terror or white solidarity but as instruments of protest and change. By subjecting the pathologies of white supremacy to a public discourse and exposing its workings on a national stage, African American activists aimed to rob lynching photographs of their racist power. For Du Bois and other anti-lynching activists, the lynching image could undermine the very white supremacy it had helped to construct.

One NAACP flier from the 1930s, for example, features a photo of the lynching of Rubin Stacy in Fort Lauderdale, Florida, for the alleged crime of “threatening and frightening a white woman.” Stacy’s body hangs in front of smiling white men, women, and children, dressed as though for a weekend picnic. Text beneath the photo instructs the viewer, “Do not look at the Negro,” directing one’s gaze instead to “the seven WHITE children who gaze at this gruesome spectacle.” The caption calls to mind artist Ken Gonzales-Day’s project “Erased Lynching,” which removes the bodies of lynching victims—many of whom were Mexican-American—from lynching photos, focusing the viewer’s attention instead on the white perpetrators and spectators. Rather than record the suffering of the victim, the focus on the spectators highlights the pathologies of whiteness.