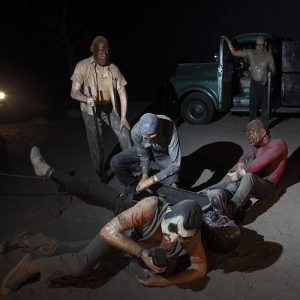 “My own research (image: tree) conducted between 2000 and 2006, looked specifically at the history of lynching, but in California. The research resulted in the publication of my book Lynching in the West: 1850-1935 (Duke, 2006) and two related art projects. The first was the Erased Lynching series in which I digitally removed both the bodies and the ropes of those lynching in California, to direct viewers to our own missing history, and to the invisibility of Latinos, native Americans and Chinese within popular conceptions of the American West. The second series, entitled Searching for California Hang Trees, served as a visual record of my own journey to go and search for all of the sites uncovered in the research. An impossible task but one which sought to destabilize my own role, as either author, artist or subject. In the interest of time, and since I have spoken on this subject before..let me just show you a few more images before moving onto the new project.

To be clear, no African Americans were ever recorded as being lynched in Los Angles, while LA and its surrounding areas, included at least 30 lynchings and 7 legal executions between 1850 and 1890, the majority of which involved the lynching and/or summary execution of persons of Mexican or Latin American decent. All 7 legal, and 8 lynchings which occurred on Fort Moore Hill on the site of the new arts high school, were Latino….”