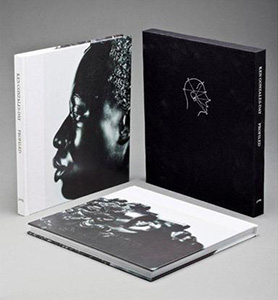 A Conversation with Ken Gonzales-Day

By Amy Schlegel and Jeanne Koles

AS: Your project Profiledis a different take on the artist-in-the museum; rather than curating an exhibition “mined” from storage vaults, you have photographed in various museum storage facilities in the U.S., Europe, and South America to produce a photography exhibition that makes a visual argument and a book that expands that argument to the current social discourse around racial profiling, particularly in the U.S. since 9/11.

KG-D: The project actually has the potential to make more than one “visual argument.” After all, the project includes thousands of photographs, taken of hundreds of sculptures, on three continents, and it is ongoing. In addition, I will be photographing in a number of museums in Paris and in Medellín, Colombia during the summer of 2011. As a result, it is my belief that the project has, and will be, configured differently for each venue; whether that venue takes the form of a publication or an exhibition. To date, the project has been guided by my own research and exploration into the relationships between a specific category of material culture (e.g. the sculptural depiction of the human form) and aesthetics. Or to put it more simply, it is a contemporary response to historical articulations of beauty and difference in the arts, humanities, and sciences. As a result, the project is closely bound to both historical and contemporary debates around the question of display.

JK: Since most of your work was done behind-the-scenes, in various collections storage vaults, can you describe your process of selecting the museums and the specific collections and then of obtaining permissions to photograph in them?

KG-D: The project began when I was a visiting scholar/artist-in-residence at the Getty Research Institute (GRI) at the J. Paul Getty Museum in Los Angeles. I worked closely with GRI staff and museum curator Antonia Broström, in order to gain access to the collection on view in the museum. The rest of the time was spent researching various collections and objects at the Getty’s research library. In the spring of that year, Karol Wight, the curator at the Getty Villa, allowed me access to the works on view at The Getty Villa in Malibu, and immediately the project began to take shape. It was a remarkable opportunity to really compare, contrast, and consider these objects in very new ways. The research at the Getty led me to the Field Museum in Chicago, which holds the Malvina Hoffman Collection.  Malvina Hoffman was an American sculptor who studied with Auguste Rodin in Paris. In 1930, she was commissioned by The Field Museum to create sculptures of 104 different racial and ethnic types for an exhibition entitled “The Races of Mankind.” Alaka Wali, the Nuveen Curator in Anthropology, and the Director of The Director of Cultural Understanding and Change Environment, Culture and Conservation, was gracious enough to allow me access to the works on display in the museum as well as those held in storage. The Hoffman commission can be seen as the Field Museum’s response to the California-Panama exposition in 1915-16 which included a number of racial, cultural, and evolutionary displays. After some additional research, I discovered that the works still existed, and I went to photograph them at the San Diego Museum of Man, where they are still held in the museum’s on-site storage facility.

Without describing all the museum collections I have visited and worked with, I would simply say that each museum collection allowed me to expand or further develop an issue or element of the project. For example, I selected the École des Beaux-Arts in Paris, because as an institution it played an essential role in instructing many artists on to how first to emulate and then to expand academic canons of beauty. In time, these canons helped to shape the image of whiteness throughout the 19th and 20th centuries.

From a logistical standpoint, it often takes months of emails and correspondence in order to secure access to specific works or collections. Visiting these collections also creates additional work for staff and security, and sometimes they are just not able to allow me more than a few hours, or even a few minutes, for a particular work. Works held in storage often need repairs, or have specific lighting or temperature restrictions, or may simply be in transition between exhibition venues. Staffing for non-secured areas, liability insurance, moving and/or lighting each work, equipment, travel, and even language can all impact my ability to photograph specific works. In short, it is a complicated process that is often completely different at each museum or institution.

JK: What was your biggest surprise as you entered collection storage at a particular museum for the first time?

I guess my biggest surprise was finding the death mask of Frederick II, also known as Frederick The Great, in a small box on a shelf in a particular storage facility in Germany. Cast in wax, it had not been displayed or photographed for many years, if ever. I was specifically instructed that its precise location must not be disclosed as it is a valuable part of German history, and I would never want to place the object at risk. In spite of its great historical value, the museum curator was kind enough to take it out of the box and allowed me to photograph it.  Frederick the Great was a great patron of the arts and had helped to support many artists and writers in his day.  He also commissioned one of the earliest and largest sculptural depictions of Chinese musicians in Europe. Since there was no Chinese community in all of Prussia, the sculptor used local residents as models, adding Orientalist details once the work was completed. Intended as chinoiserie, it combined a mixture of ornamental Rococo elements as a kind of Orientalist folly, and as such, it reveals something about the early construction of difference in 18th century Europe.

AS: Did you rearrange objects in storage to create certain juxtapositions, or were those contrasts created digitally?

KG-D: I was not allowed to touch or move any of the sculptures or objects because of the delicate nature of the works. As a result, certain juxtapositions had to be created digitally.

KG-D: I photographed works on display as well as in storage.  I photographed the sculpture wherever they were and under whatever circumstances museum staff would allow me to. I often travel with a simple black backdrop, which was sometimes used to isolate the sculptures from their surroundings. The use of lights, tripods, ladders, and even cameras was dependent upon the particular restrictions established by each museum.

AS: What motivated you to develop Profiled? How has being a long-time resident of Los Angeles influenced the creation of this project?

KG-D: In a way, the project began from one sculpture in the J. Paul Getty museum. It is titled, Bust of a Man, and was sculpted in black stone by Francis Harwood in 1758. According to the Getty, the identity of the man is unknown but they suggest that the presence of a scar on the man’s face supports claims that it was derived from a specific individual, and that, as such, it may be one of the earliest sculptural portraits of a black individual by a European. As I considered the sculpture I began to wonder how it came to be in Los Angeles and as I watched museum visitors stroll past it at full speed, I couldn’t help but wonder if anyone every really saw it. Did they consider the complex historical conditions that must have contributed to its making? I wondered how the social, cultural, political, scientific, and aesthetic resonance of blackness had changed over the centuries. And what of the model, would he be at home in Los Angeles today? Would we at least know his name today? Like a photographic portrait, the sculpture contains a number of convincingly realistic qualities that clearly enhance its physical presence, but is it a realistic portrait, an avatar for the artist, or just an assemblage of visual tropes? These were just some of the questions that ran though my mind as I considered the polished stone surface of his face, and just a few of the questions that lie beneath the surface of Profiled.

AS: Tell us about the one photograph of a contemporary person in the Tufts exhibition, Untitled (Nora Scully, Cast of Alison, Oakland), depicting a wax cast carved marble, pendant portrait of a young African American woman in profile, and how this images takes us as viewers into the present moment and the discourse around racial profiling.

KG-D: In the book, Profiled(LACMA 2011) the wax cast of Alison’s face is paired with a photographic image of her taken in profile. The wax cast was made by Nora Scully, an artist, educator, and community organizer who lives in Oakland, CA. Working with Nora, we created similar pairings of a number of different individuals, of different races and genders, presenting each portrait with a cast of their face. The cast has an indexical relationship to the face. The photograph has an indexical relationship to the cast, but culture transforms this simple gesture into something more, or at least something different. The pairings were originally presented as part of a fund-raiser for DeafHope, a nonprofit organization, established for and by Deaf women. The mission of DeafHope is to end domestic and sexual violence against Deaf women and children through empowerment, education and services.

It should probably be said that Alison is not deaf, a simple fact that evades the camera’s lens and points to the limitations of photography as a representational system. Naturally, the portrait stands in for the real person but it also transforms the individual into an object, a surface that reflects more than light alone. It may be aesthetic, but the form of the profile, once so popular, has been transformed by the instramentalization of the mug shot. So, it is hoped that the image will provide a broader context to the depiction of race found in the photographs, and locate the exhibition within the many discussions of race that surround us all, and remind the viewer that race is literally a cultural construction. After all, stone and wax have no race, and yet in spite of this knowledge, we still see race – or fail to see it, in the case of whiteness, all around us. The photograph is also part of a larger series of photographs (not included in the Tufts exhibition) that have all been taken from life-casts stored in various museum collections. Unlike the many historical sculptural depictions found in the Tufts exhibition, this image, clearly taken from life, speaks to the complexity of even the simplest of gestures and the difficulties of trying to unsee race- or at least to see it though new eyes. Perhaps it will invite those viewers who only see only difference, to look again.

A free excerpt of the monograph can be found below. The hardcover is available for 50 US, or limited numbered set (50 total, 15 left)  of  black linen box cased edition, with signed 8 x 10 print for 500 US.