From Yodeling to Quantum Physics…

Annual Publication of the Palais de Tokyo including images and information on exhibitions held in 2009.

Gonzales-Day’s, The Wonder Gaze (St. James Park), 2006-09, was created specifically for this exhibition and displayed at approx. 20 x 60 feet. The piece was   installed in a corner creating to create a sculptural work that engaged the space in new ways and invited viewers to reimagine how they understood photographic images, in much the same way that the David Smith sculpture in front of it, had change how a generation came to understand sculpture. 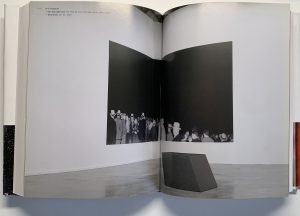 “On the short waves of our radios, voices read out uninterrupted series of numbers. 2… 11… 58… 35… 23… Whether they are encrypted instructions intended for sleeping agents, messages exchanged between traffickers, or simple telephone settings, the “Spy Numbers Stations” have been broadcasting for several decades without their precise function becoming known.

By choosing to broadcast simple lists of numbers via the radio-relay network, these number radios operate in the manner of “inverted camouflage”: invisibility which is made almost impossible given the sophistication and “maximalism” of Internet networks is finally achieved via an ordinariness that allows it to blend into the mass of information. Is it possible for as archaic an encoding system as a series of numbers to remain infallible?

In the wake of GAKONA, the previous exhibit inspired by the work of Nikola Tesla, the Palais de Tokyo continues with SPY NUMBERS the exploration of the electromagnetic spectrum and its margins. Beyond the visible and closer still to the infra-thin and the spectral, the Palais de Tokyo experiments with forms of art that elude any wistful desire for fixed interpretations. In spite of the exhibition area being reduced to half its normal size because of building work within the Palais de Tokyo, SPY NUMBERS brings together eleven French and foreign artists. They attest to the emergence of the French artistic scene and of foreign artists rarely exhibited in France, led by two tutelary figures in the shape of Jim Shaw and Tony Smith. Mathematical encoding, the production of the aurora borealis, the archiving of contact lenses, seismic sensors, the disappearance of hanged men or indeed of the mountaintops: Their works tackle subject areas that make this second session of 2009 a perfect follow-up to GAKONA. Between fact and rumor, reality and phantasm, science and imagination …”