WASHINGTON – It’s been three years since the National Portrait Gallery acquired the portrait of Osage leader and warrior, Shonke Mon thi^, for its permanent collection. On Tuesday, his portrait and bust were displayed to his descendants for the first time, who in turn conducted a blessing ceremony for the historic occasion.

Dr. Steven Pratt, wearing Shonke Mon thi^’s peace medal, took his eagle fan and said a prayer in the Osage language for all those in attendance. He then blessed the bust and portrait and spoke about his great-grandfather.

“It’s just been a wonderful journey for us, to be able to do this,” Pratt said. “He was a warrior, that’s one of the things he was known as, but a warrior takes on many forms.”

The journey for the bust and portrait was the result of work by Latino artist Ken Gonzales-Day and Dr. Taína Caragol, Curator of painting, sculpture & Latino art and history for the Smithsonian. 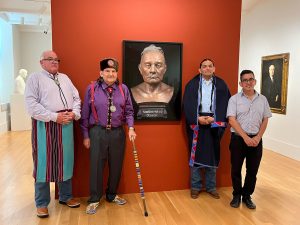 In 2014, through a Smithsonian Artist in Residency Fellowship, Gonzales-Day sought to photograph and address the underrepresentation of Native Americans, African Americans and Latinx in sculpture. The project resulted in the 2018 exhibition, “Unseen: Our past in a new light, Ken Gonzales-Day and Titus Kaphar,” which was presented as part of the museum’s 50th anniversary exhibition program.

Caragol said the exhibit highlighted how people of color were sculpted only to show racial difference, rather than to honor their achievements. She said it was from this exhibit that one portrait stood out.

“It was actually one individual, Shonke Mon thi^, who had so many distinguished facts about his biography that he could be considered by art historians to possibly enter our permanent collection and that was the case,” Caragol said.

The National Portrait Gallery uses a curatorial committee comprised of historians and curators to assess whether a portrait’s sitter is someone who has helped define American culture and history, she said. Shonke Mon thi^ was such a person.

“I am very happy that he is part of our permanent exhibition. The sculpture and photograph will be up for a year together,” Caragol said.

In the early 20th century, Shonke Mon thi^ was a priest and one of the most decorated warriors of the Osage. In his role as priest, Shonke Mon thi^ closely guarded specific clan rituals. He was also an early practitioner of the Native American Church. By the end of his life in 1919, he had received all thirteen war honors or O-don of the Osage. As a young man, he earned his name, which translates to “Walking Dog,” for his remarkable ability to run long distances, carrying messages between Osage chiefs. In 1863, Shonke Mon thi^ was commended as a warrior for his role in an attack on Confederate troops in Kansas. He joined a delegation of Osage leaders who traveled to Washington, D.C., to negotiate land and mineral rights in 1904. According to oral tradition, Anglo-Americans unable to pronounce his name called him Shunkamolah. Around this time, Shonke Mon thi^ also assisted Smithsonian anthropologist Francis La Flesche, Omaha, in documenting Osage cultural practices.

Cullen Cobb said the bust had chips and other damage on the bust, plus there were layers of paint where over the years various individuals had painted over damaged areas. They wanted the bust to look just like it did when it was made, and Tsang had the job of mixing the paint just right to finish what is now a beautiful bronze-colored bust that looks brand new.

They began the restoration in 2019 but stopped through the pandemic and began again in May of this year, finishing in July.

“The actual process of repairing it took about a couple of weeks,” Cullen Cobb said. “But the process of deciding and bit by bit, what we were going to do, took about a year.”

After the blessing ceremony concluded, the group highlighted the artist who chose to photograph Shonke Mon thi^.

“Having the work in the National Portrait Gallery is an important life event for me,” he said.

Gonzales-Day said it was the result of 20 years spent trying to create an artistic project using photography that talked about race and racial differences in America. As a Mexican American, his project started by looking for Latinos in different museum collections and looking for in particular, individuals, that were sculpted or cast. He wanted real people, who had a real name, and were somewhere in the collection, he said. Trying to find those, which meant getting museums to allow him to go into their storage facilities and take photos, “which they don’t like in general,” he said, was a challenge. Once the photographs were taken, he ended up with photographs of over 80 objects, most of which have never been seen.

“Tracing together the history of a particular object and all of the people it’s touched, and all of the people it will continue to touch, instead of having it sit in a basement for the rest of time because we’re embarrassed about the history of colonialism and racism in America,” Gonzales-Day said. “I think it’s a far better strategy to bring things out of the shadows, put them in the light, and talk about what we’re looking at, acknowledge it, share it, and celebrate it.”

The National Portrait Gallery, along with Shonke Mon thi^, has six portraits of Osage individuals in its collection, including portraits of Mohongo and Maria Tallchief.

The National Portrait Gallery is part of the Donald W. Reynolds Center for American Art and Portraiture at Eighth and F streets N.W., Washington, D.C. Smithsonian Information: (202) 633-1000. Connect with the museum at npg.si.edu, Facebook, Instagram, Twitter, and YouTube.