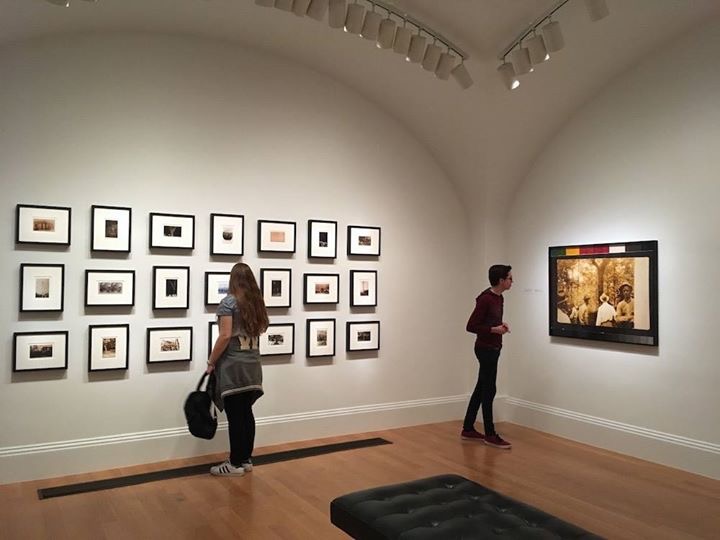 The exhibition consists of two solo shows presented in parallel. Gonzales-Day collaborated with Caragol and Naeem worked with Kaphar. After a welcome from museum’s director Kim Sajet, the artists and curators walked the press through the show on Thursday in advance of its March 23 opening.

Both artists concentrate on untold histories and reframing the American narrative, but their practices are vastly different.

LOS ANGELES-BASED GONZALES-DAY mines museum archives and photographs sculptural objects most of them rarely, if ever, displayed publicly. His work deconstructs racial hierarchies, considers beauty ideals, and evaluates how artists have treated and interpreted white bodies and bodies of color. He embarked on this aspect of his practice in 2008 during a residency at the Getty Research Institute in Los Angeles. Over the past decade, he said he has been given free reign to explore the collections of about 20 museums around the world.

In “UnSeen,” one gallery focuses on busts and life masks found in Washington, D.C., museums. Gonzales-Day said he wanted show how “our” country presents its people in the nation’s capital. “13 Plasters: Presidents, Men of Art and Science, and Military Men at the National Portrait Gallery” is a large-scale tableaux image of casts of figures such as Abraham Lincoln, Ben Franklin, and George Washington—all white men, no women or people of color. Individual images of Native American busts from the National Museum of Natural History hang on the opposite wall.

The busts were made in the late 19th and early 20th centuries with the cooperation of living Native Americans under the guidance of Smithsonian anthropologists, either in the course of field research or through meetings with Native American delegates visiting Washington to negotiate land rights and sign treaties.

“By juxtaposing these two types of sculptures and these individuals, Ken is asking us to consider them on equal ground as integral people to American history,” Caragol said. Then she pointed out one of the busts, “Gives to the Poor, Pawnee Scout Battalion, United States Army” (1887), and said until recently the subject had been identified with the wrong name.

“We’ve been working together for four years on this project and this is a lot of thinking about not just what is missing, but who is missing. I’ve looked up the genealogies of all of these individuals going back as far as I could. It’s not only about absence or erasure, this is really about trying to fill in some gaps,” said Gonzales-Day.

“The sculpture was unidentified on a shelf and now he has his name back (“Gives to the Poor”). …It’s been misidentified for 100 years. You are the first people to know his real name outside the community and it’s only because Taína and I worked together, mostly Taína on this one, to help give that name back. There are stakes here that are very real. She was just emailing descendants.”

“We’ve been working together for four years on this project and this is a lot of thinking about not just what is missing, but who is missing. …It’s not only about absence or erasure but this is really about trying to fill in some gaps.” — Ken Gonzales-Day

HIS GROUNDBREAKING RESEARCH extends to the history of lynching. Generally from the late 19th to mid-20th centuries, blacks in the South were the targets of lynchings at the hands of whites. Lesser known is the history of other races victimized by lynching.

Historically, the NAACP kept track of lynchings, categorizing victims in two distinct groups—black or white. The vast majority were black and, according to Gonzales-Day, those recorded as white, in most cases were actually Latino American, Native American, or Asian American.

In the exhibition, he examines the gamut, emphasizing the violent incidents that took place in the Western United States. He also notes prior research that uncovered documentation of 547 Mexicans killed by lynching between 1848 and 1928.

The artist’s “Erased Lynchings” series is based on archival images of lynchings that occurred between 1850 to 1942. Modest-sized gatherings and mob scenes near trees and hanging scaffolds in places like Canon City Colo., Delphi, Ind., Tampa, Fla., Atlanta, Ga., and Downieville, Calif., are shown in the historic photographs. The captions reference “Executing Bandits in Mexico” and describe some victims as “Unidentified African American.”

Gonzales-Day presents 21 images previously circulated as postcards and souvenirs in a gallery-style installation. Using digital editing, he has removed the victims from the images, in order to to avoid re-victimizing them and concentrate on the people gathered to witness their violent deaths. The wall text describes the bystanders as “men in suits, children looking perplexed, and soldiers smiling broadly.”

The artist’s “Erased Lynchings” series is based on archival images of lynchings that occurred between 1850 to 1942. Mob scenes near trees and hanging scaffolds are shown in the historic photographs. The wall text describes the bystanders as “men in suits, children looking perplexed, and soldiers smiling broadly.”