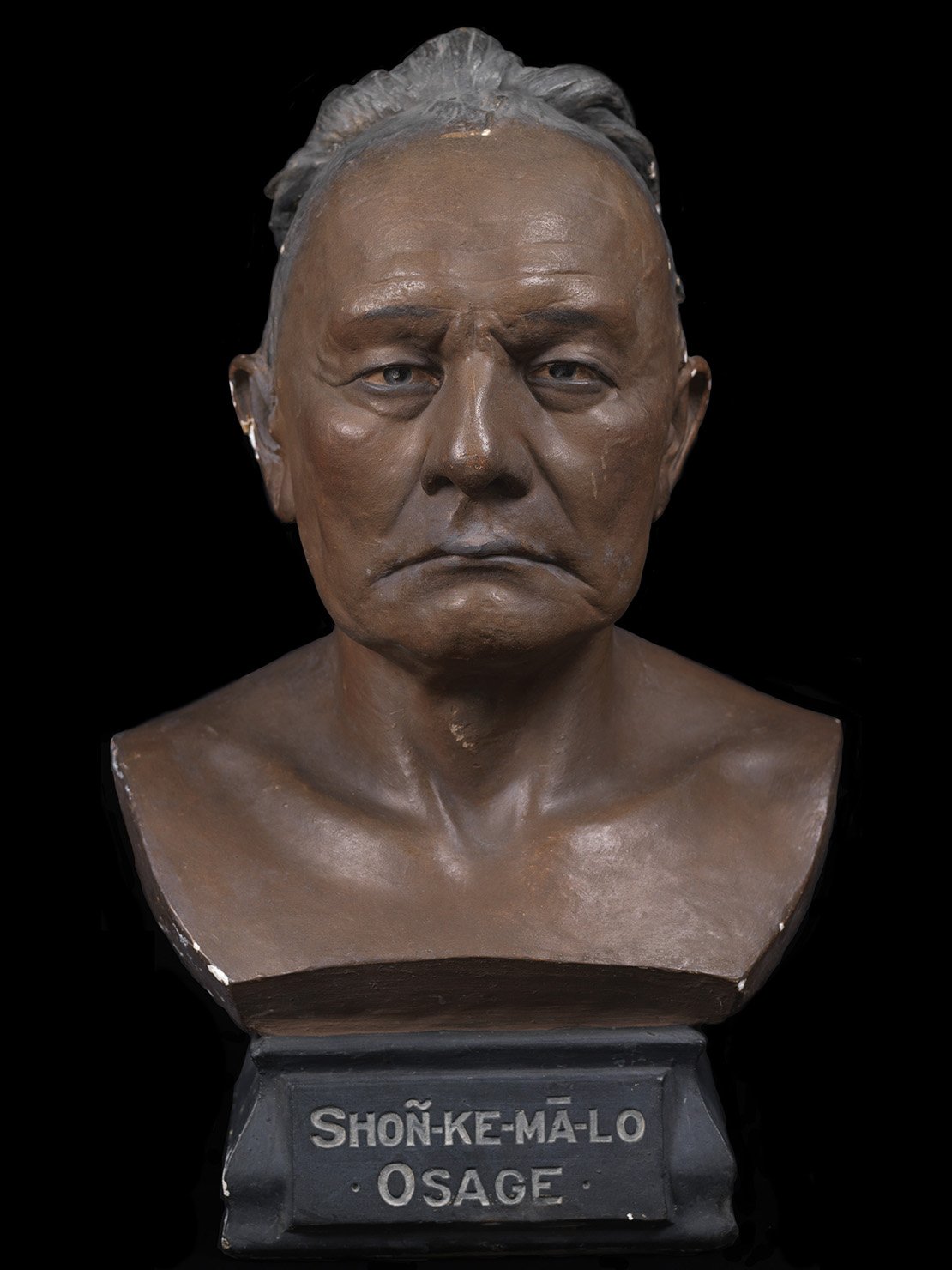 The Smithsonian’s National Portrait Gallery announces the acquisition of a photograph of the bust of Shonke Mon thi^, who was a prominent warrior and spiritual leader of the Osage people and hereditary Chief of the Pa tso li^ Big Hill Band at the turn of the 20th century. This work by Latino artist Ken Gonzales-Day was first displayed by the Portrait Gallery in “UnSeen: Our Past in a New Light, Ken Gonzales-Day and Titus Kaphar,” which was presented as part of the museum’s 50th anniversary exhibition program.

“The acquisition of this portrait not only provides us with an opportunity to present a more inclusive view of American history but also to reflect on how museums have acknowledged the identities and contributions of Native Americans,” said Taína Caragol, Curator of Latino Art and History, Smithsonian’s National Portrait Gallery. “We are delighted to welcome this work into the Portrait Gallery’s collection, in accordance with the wishes of Dr. Steven Pratt and Joseph Shunkamolah, great-grandchildren of Shonke Mon thi^, as well as the Osage Nation Historic Preservation Office and the Traditional Cultural Advisors Committee.”

In the early 20th century, Shonke Mon thi^ was a priest and one of the most decorated warriors of the Osage. In his role as priest, Shonke Mon thi^ closely guarded specific clan rituals. He was also an early practitioner of the Native American Church. By the end of his life in 1919, he had received all thirteen war honors or O-don from his Nation. As a young man, he earned his name, which translates to “Walking Dog,” for his remarkable ability to run long distances, carrying messages between Osage chiefs. In 1863, Shonke Mon thi^ was commended as a warrior for his role in an attack on Confederate troops in Kansas. He joined a delegation of Osage leaders who traveled to Washington, D.C., to negotiate land and mineral rights in 1904. According to oral tradition, Anglo-Americans unable to pronounce his name called him Shunkamolah. Around this time, Shonke Mon thi^ also assisted Smithsonian anthropologist Francis La Flesche (himself an Omaha Tribe member) in documenting Osage cultural practices.

The image of Shonke Mon thi^ is part of Gonzales-Day’s series Profiled (2008–present), in which the artist photographs figurative sculptures in American and European museum collections in order to explore conceptions of racial difference and beauty in art. By displaying the sculptures against stark backgrounds, the artist reveals the differences in how white bodies and bodies of color are portrayed, contextualized and interpreted. In 2014, under the auspices of a Smithsonian Artist Residency Fellowship, Gonzales-Day documented the representation of Native American historical figures in the Smithsonian Institution’s collections. He found very few indigenous sitters in the Portrait Gallery’s sculptural holdings. By contrast, a multitude of sculptures at the National Museum of Natural History represent Native Americans. The vast majority of these works, including the bust of Shonke Mon thi^, were based on molds made from the faces of living individuals. Photographs of Native Americans at their reservations or in Washington, D.C., on diplomatic missions served as additional references. The aim of the finished sculptures, which were exhibited primarily at world’s fairs, was not to commemorate the sitters’ achievements. Rather, they served as tools for anthropological study. For Gonzales-Day, the act of photographing these individuals’ busts and researching their lives is a way to recognize their importance and ultimately include them in the collection of art museums.

In order to restore their ancestor’s original name, the sitter’s descendants led the initiative to change the title of the sculpture from Shunkamolah to Shonke Mon thi^ in museum records. His descendants continue to work as stewards of Osage culture and language, and of the Native American Church.

The Smithsonian’s National Portrait Gallery tells the multifaceted story of the United States through the individuals who have shaped American culture. Spanning the visual arts, performing arts and new media, the Portrait Gallery portrays poets and presidents, visionaries and villains, actors and activists whose lives tell the American story.

The National Portrait Gallery is part of the Donald W. Reynolds Center for American Art and Portraiture at Eighth and F streets N.W., Washington, D.C. Smithsonian Information: (202) 633-1000. Connect with the museum at npg.si.edu, Facebook, Instagram, Twitter, and YouTube.

Osage News: Why was the photo of Shonke Mon thi^ chosen for the National Portrait Gallery’s permanent collection?

Caragol: “We chose to acquire Ken Gonzales-Day’s photograph of Shonke Mon thi^’s bust because the sitter fulfilled our requirement of national significance. He was one of the most distinguished Osage warriors of his time, as a well as a spiritual leader, and hereditary Chief of the Pa tso li^ (Pah-Sue-Lee) Big Hill Band at the turn of the 20th century. He is also someone who is connected to the diplomatic history of Washington, D.C., as he was part of the Osage Delegation that traveled to the capital in 1904 to negotiate their Nation’s land and mineral rights. While he was here, his photograph was taken and a mold of his face was cast by the emerging Department of Anthropology of the United States National Museum, the Smithsonian’s original name. This portrait is quite particular. It is not a straight photograph of Shonke Mon thi^, but a photograph by contemporary artist Ken Gonzales-Day of a bust made in the early 20th century, now in the collection of the National Museum of Natural History. This artwork sheds light on the history of sculptural portraiture, and on how the busts of indigenous people at the turn of the century were often created as tools of ethnographic study, more than as artworks to memorialize individuals and their deeds.

Osage News: How does the process work for choosing an image for the National Portrait Gallery?

Caragol: “Our process involves several steps. As a museum of history and portraiture, our curatorial committee is comprised of historians and curators. The museum’s historians must assess whether the portrait’s sitter is someone who has helped define American history and culture. Only if the sitter qualifies, the curators evaluate the artistic merit of the piece. Then our Board of Commissioners also needs to approve. The acquisition of this portrait was special because it involved a few more steps of consultation with Osage stakeholders and with our sister institution the National Museum of Natural History, where the original bust photographed by Gonzales-Day is housed. We wanted to make sure to locate the descendants of Shonke Mon thi^ and to make sure they agreed to this acquisition, as well as to get the approval of the Osage Tribal Historic Preservation Office and the Traditional Cultural Advisor’s Committee. I was in conversations with them, and triangulating with the artist for several months. In the process, we learned more and more about the historic role of Shonke Mon thi^ in our national history. It was a beautiful collaborative process and I am grateful to Dr. Steven Pratt, great-grandson of Shonke Mon thi^ for all his support which even resulted in the restitution of the sitter’s name from Shõn-ke-mã-loh popularized by Anglos who could not pronounce his name to Shonke Mon thi^.”

Osage News: Are there many portraits of Native Americans in the NPG? Is the portrait of Shonke Mon thi^ the only portrait of an Osage?

Caragol: “Yes. We have 313 portraits of Native Americans in our collection. The majority of them are prints made in the 19th century, but we also have photographs and some paintings. With Shonke Mon thi^’s portrait, there are six portraits of Osage individuals in the collection of the National Portrait Gallery, including figures such as Mohongo and Maria Tallchief

Osage News: When might the portrait of Shonke Mon thi^ be available for viewing at the NPG?

Caragol: “Our exhibitions and permanent installation are planned two and three years ahead. We do not have a clear timeline yet for Shonke Mon thi^, but we are working on it, hoping to have the occasion to put it on view soon.” 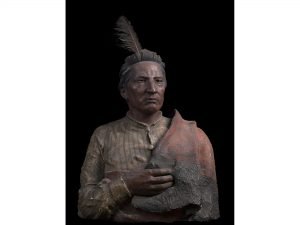 Osage News: Is there anything you would like to add about the reaction from people of the portrait of Shonke Mon thi^ when it was included in the exhibit, “UnSeen: Our Past in a New Light”?

Caragol: “UnSeen: Our Past in a New Light, Ken Gonzales-Day and Titus Kaphar,” was one of our 50th anniversary exhibitions. It addressed the underrepresentation of Native Americans, African Americans and Latinx—all of them founding communities in the United States—in traditional portraiture. Many visitors were extremely moved by the show, its foregrounding of those communities, and the way that the artists with their insistence on that subject, re-inscribed their individual stories into our national history. The portrait of Shonke Mon thi^ bore one of those remarkable, individual stories. People were very happy to learn about him, as well as about other figures in the room, including Oglala Leader Mahpiya Najiŋ (Standing Cloud), and Pawnee Scout Gives to the Poor.”