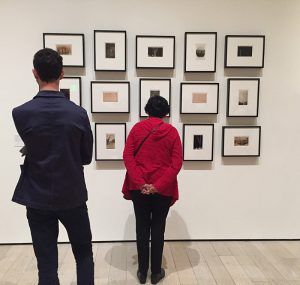 “The Los Angeles County Museum of Art (LACMA) is pleased to announce L.A. Exuberance: New Gifts by Artists (October 30, 2016–April 2, 2017), featuring a selection of works given to the museum for its 50th anniversary as part of an unprecedented campaign led by artist Catherine Opie. The exhibition includes gifts from Opie, Larry Bell, Tacita Dean, Charles Gaines, Friedrich Kunath, Sterling Ruby, Ed Ruscha, Analia Saban, Mario Ybarra Jr., and others, with a spotlight on the generosity of John Baldessari, who has made numerous gifts of his own work as well as pieces by other artists. L.A. Exuberance displays over 60 objects including painting, photography, drawing, prints, sculptures, mixed media installations, and time based media, and is curated by Rita Gonzalez, curator and acting department head of contemporary art, with Michael Govan, LACMA CEO and Wallis Annenberg Director. The title L.A. Exuberance is taken from a series of lithographs that British artist Tacita Dean made during a recent artist residency in Los Angeles.”