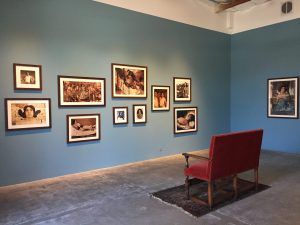 First, Gonzales-Day is both an artist and historian. This is apparent in the research he has done for this show (and for others of his hallmark projects including his Erased Lynching series and his subsequent history book Lynchings in the West, featuring the groundbreaking archival research he did to ground such series as Erased Lynchings, Hang Trees, and Portraits). In Bone-Grass Boy, Gonzales-Day’s historical research is both deeply personal and intimate, as well as public. All photographs in the show are theatrical self-portraits played by the artist himself, as he embodies all of the characters in his narrative. Gonzales-Day researched his family tree and found these ancestral names and personages he wanted to flesh out, explain, and explore visually and dramatically through self-portraiture, narrative writing, and an amazingly delicate and intricate family tree: a striking new addition featured in the updated show. Both the tree and the show’s narrative trace his family’s Mexican, Aztec, Spanish, and Native American roots and their movements between changing cultural and territorial landscapes, at times divided and split arbitrarily between borders.

Second, Bone-Grass Boy both in the 90s and in the present seeks to intervene in the artworld and with history-writing itself. Gonzales-Day set out to create what he termed a “nevermade,” to spark a direct conversation with Marcel Duchamp’s iconic conception of the “readymade.” As the press release explains, “[t]he reversal of the readymade – that is to say, the creation of an object that was never made, but that is given the appearance of a historical document – offers a subtle and humorous critique of the avant-garde appropriation of the everyday object.” In creating physical histories, documents, narratives, maps, and even aged books to tell his family’s imagined story, he seeks not only to explore, but also to challenge this historical erasure at the same time.