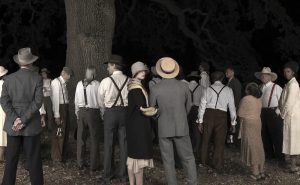 For the last 15 years, photographer Ken Gonzales-Day has been researching, and making art about racially motivated vigilantism in the American West. In past installments of his “Erased Lynching” series, he has used found images and archival materials to revive forgotten horrors. But for this exhibition of new work, the artist presented an original movie and related color prints in which actors re-create a 1920 lynching in Santa Rosa, California.

The beautifully crafted film Run Up (2015) spares viewers the sight of Charles Valento, a Latino known as “Spanish Charley,” dangling from a tree. But with its images of silent observers exchanging knowing looks, it is nevertheless chilling. A nearby group of still photographs featured scenes from the film restaged as dramatic tableaux.

In a separate room, Gonzales-Day brought his subject up to date in works that insert characters from Run Up into photographs of the protest marches in Los Angeles that followed a grand jury’s refusal to indict Darren Wilson, a white police officer, for fatally shooting Michael Brown, an unarmed black teenager, in Ferguson, Missouri, in 2014. Opening at a moment of nationwide anguish over police brutality, this troubling show juxtaposed past and present, while calling attention to America’s under-documented history of violence against Latinos.