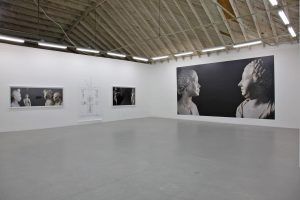 Ken Gonzales-Day’s understated exhibition at Las Cienegas Projects opens with a lovely sequence of photographs reproduced from the artist’s own collection. Each small enough to hold in the hand, most of the images look like they were shot in the portrait studios of the early 20th century. The sequence begins with several pairs of cowboys in furry chaps — a strange, but apparently popular get-up — playfully aiming their guns at each other. These are interrupted midway by a shot of a Classical statue of Pan — a hedonist, also of the furry legs. The pictures then turn to images of cross-dressing men and women in various combinations, interspersed with more images of Classical statuary. It’s not always clear what the relationships were between the people in the pictures — whether they were lovers, friends, or just having a laugh — but simply raising the question is the work’s poignant, egalitarian point. Gender has always been a performance, and we have always been queerer than we may have liked or been able to let on.

The rest of the show is dedicated to photographs of statuary, both from art museums and from the Malvina Hoffman Collection, a 1930s series of sculptures Hoffman made for the Field Museum of Chicago representing 104 racial “types.” Most of the photos pair sculptures so they are facing each other, a European or Classical example across from an anthropological one. The immediate reaction is to compare features, to assess differences and similarities, to contrast portraits of actual people with presumably generalized composites.

Gonzales-Day anticipates this response with a large diagram: a portrait of his own head inside a cruel-looking cranial measuring device. Of course reducing entire populations of people to representative archetypes is racist and dehumanizing — this we know. But what emerges from these dual portraits is something more tender and strange. Perhaps it’s the veiled eroticism of the guys in fuzzy chaps on the other side of the room, or a smaller selection of images of classical statuary defaced with lewd graffiti, but the impassive sculptural pairs begin to look oddly like couples, gazing at each other across boundaries of geography, time and ignorance.