Luis De Jesus Los Angeles is very pleased to announce KEN GONZALES-DAY: ANOTHER LAND, on view in the East Gallery from January 8 – February 19, 2022.  An artist reception will be held on Saturday, January 8th from 3:00 pm to 7:00 pm.

Another Land, Ken Gonzales-Day’s fourth solo exhibition with the gallery, will present a new series of drawings by the artist that began as part of a special commission created for the Smithsonian’s Journal of the Archives of American Art.  Begun in 2020, the drawings are derived from a collection of original paintings, drawings and fine art prints included in the first exhibition on lynching in the United States entitled, An Art Commentary on Lynching, which was held at the Arthur U. Newton Galleries in New York City from February 15 through March 2, 1935.  It was organized by Walter White, then Secretary of the NAACP in collaboration with the College Art Association.  White had revived the NAACP’s legislative campaign against lynching and was seeking support for the Costigan-Wagner bill, which was introduced into Congress in 1934 but was never passed.

An Art Commentary on Lynching served two primary purposes: to bring attention to the existing practice of lynching throughout the South and to raise questions on how to end it.  The commentary included in the exhibition catalog propels the conversation on this uncomfortable topic by asking how a community can consider itself civilized when it engages in the torture, mutilation, and murder of another individual.1 Erskine Caldwell, the American novelist known for his writings about poverty, racism and a brutally realistic depiction of the rural South, touched on this question by declaring, “Social deterioration is the payment extracted for a lynching.” 2 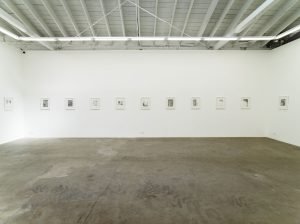 Given Gonzales-Day’s extensive work on the history of lynching in the United States, he was curious to learn more about how these artist’s work was received at the time.  In creating a series of drawings inspired by these historic works, the artist made the decision to remove all of the lynching victims and the ropes from the images – a conceptual strategy that he established in his acclaimed Erased Lynchings photographic series (2006-present) – but in this case, he pushes it even farther by removing any depictions of the individuals in the lynch mob as a way of drawing our attention to the natural and built world as rendered through the original artist’s hand.  The result of stripping these scenes of all humanity are haunting landscapes that pulse with visceral absence and, as Caldwell noted in describing the savagery of lynching, “all trace of progress and civilization.”

A set of four larger-scale drawings looks at the history of conquest and colonization in the Americas. The conquistadores and indigenous peoples have been removed to invite further consideration of the history and legacies of settler colonialism on indigenous cultures, on the land, and in the formation of what scholar Claudia Rankine has termed, The Racial Imaginary.

In Another Land, Gonzales-Day invites the viewer to consider both the history of lynching at the national level, which included the lynching of what we now know to be hundreds of Latinx victims, as well as the historic role of the artist in raising awareness of a wide range of social, political, and historical issues in our nation – from John Singleton Copley’s painting Watson and the Shark (1778) to Reginald Marsh’s drawing This is her first lynching (1934), which was included in the An Art Commentary on Lynching exhibition, to the use of art in contemporary social justice movements.

From the artist’s statement on the work:

The Decolonized Drawings  look at images of conquest and colonization across the Americas. As in the first series, all the figures have been removed. Whether they were the invading soldiers, settler colonialists, or fantastical depictions of indigenous peoples. Removing the figures reveals a clearly altered reality. Utopian and dystopian at the same time. Because there is now way back, only forward. This new landscape reflects a world altered by colonialism. We sense the absence of indigenous communities from the land, as fantastic beasts and vegetation speak volumes to the riches to be plundered. Even Adam and Eve take on new meaning, as rendered by Theordore de Bry (1590-1602), when followed by indigenous queer communities being eaten by dogs, or the landscape in a Casta painting — rich in its depiction of natural resources. As in earlier bodies of work, removing these historic and cultural acts of violence, does not erase or deny the violence, but invites critical engagement.

As an artist, I have been redrawing the works of other artists. While refusing to re-draw, or re-represent the lynching victims, I openly explore the physical process of drawing images that must have been traumatic for each of the artists who produced them, particularly given the controversy surrounding the exhibition and the historical moment in which they were living, and reflects directly on our own time when, historical erasures and the misrepresentation of real events lead to the insurrection on Jan. 6 in our nation’s capital, and continues to impact debates around vaccine across the nation, at a time when such false and misleading claims, may undermine Roe v. Wade, our elections, our climate, and threaten our very democracy. 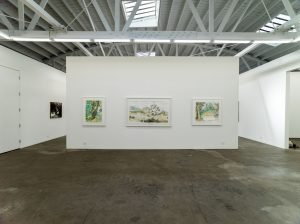 Ken Gonzales-Day’s interdisciplinary and conceptually grounded photographic projects consider the history of photography, the construction of race, and the limits of representational systems. Gonzales-Day is a Getty scholar and a Terra Foundation, Smithsonian Museum and Guggenheim fellow.  In 2018, he was the subject of a solo exhibition at the Smithsonian National Portrait Gallery in Washington, D.C.  A former Chair and current professor of art at Scripps College, Gonzales-Day’s exhaustive research and book Lynching in the West, 1850-1935 (Duke Univ. Press, 2006) led to a re-evaluation of the history of lynching in this country.

For further information, including images and previews, please call 213-395-0762, or email: gallery@luisdejesus.com.

Image at top:
Untitled (After Jan Jansz, Landscape with an Episode from the Conquest of America, c.1535 (Rijksmuseum), 2021

No Images.
Please upload images in images manager section. Click on Manage Images button on the right side of the gallery settings.