Gonzales-Day fills the holes of history. 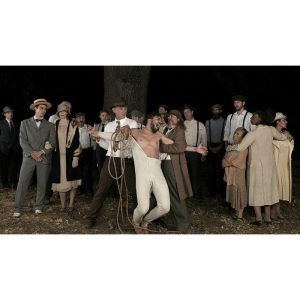 “Gonzales-Day’s work is instructive but far from didactic. It’s a history lesson taught through the framing of holes in the record and by collapsing the space between different times and places. It disturbs in direct proportion to its importance, and it does disturb.

Gonzales-Day began his “Erased Lynching” series in 2000 to explore the underrepresentation and misrepresentation of racially motivated lynching. In his new work at Luis De Jesus, he extends the series into film for the first time.

“Run Up,” just under eight minutes in length, presents a stylized reenactment of a 1920 lynching in Santa Rosa, Calif. The victim was a Latino man, and though more Latinos were lynched in this state than members of any other ethnicity, their story is largely untold.

Gonzales-Day’s research pointed to the likelihood that police were present, suggesting tolerance for the vigilantism, if not complicity. The film is episodic and discontinuous, mildly haunting. Though it describes a single event, action shifts back and forth between the cover of night and the light of day, conjuring the lynching’s variable realities as suppressed history and public spectacle…”