↓ Skip to Main Content
Home › Publications › From Postcards to Plaster Casts: The Image of Lynching in Kienholz’s Five Car Stud.

From Postcards to Plaster Casts: The Image of Lynching in Kienholz’s Five Car Stud. 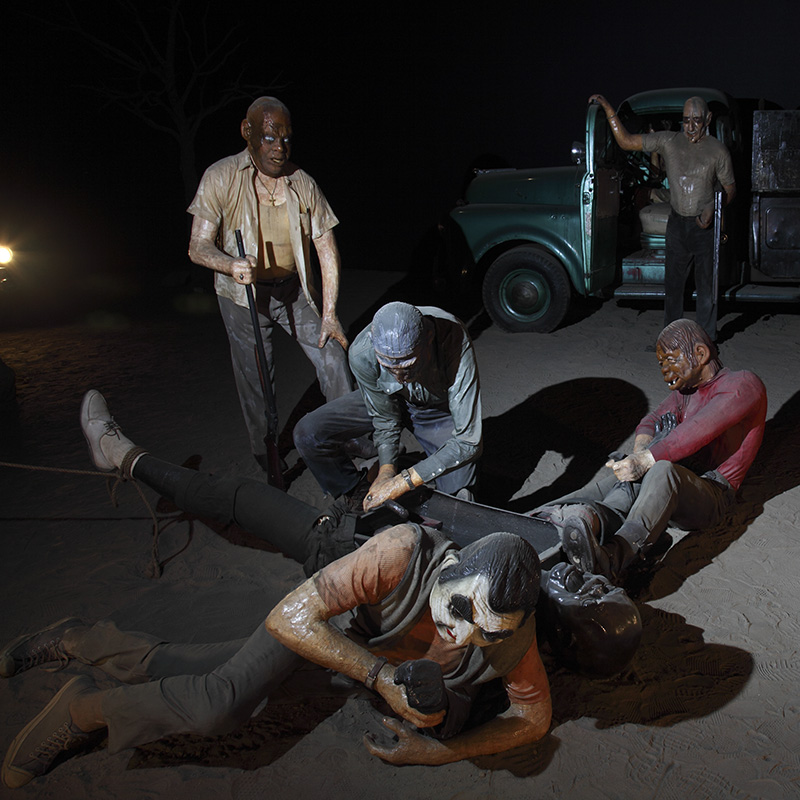 “Edward Kienholz’s Five Car Stud was first exhibited in 1972 inside an inflated dome at documenta 5, in Kassel, Germany, and remains a powerful and disturbing work nearly forty years after its making. It depicts an interracial couple after six white masked men have discovered them alone on a dirt road in the dark of night. The black man has been pulled from the pickup and is being pinned to the ground by two of the men. Two others have riffles, and still another man, wearing a creepy clown mask, has tied a long rope around one of the black man’s legs and is pulling with all his might. A sixth man grabs the figure’s penis and prepares to castrate him. Clear and dark amber liquids drip down their cloths, over their masks, and down their arms in a manner that is both disturbing and typical of Kienholz’s work. The white woman sits inside the pickup and covers her mouth in a gesture that suggests vomiting. A wide-eyed young white boy stares onto the scene from inside one of the four cars that circle the figures, learning its hateful message. Delta blues play on the radio and adds a rural feeling to the darkness.

There are some man-made boulders at one end of the installation and in-between the cars are what appear to be two life-size sycamore trees and a small oak. The branches of the two larger trees reach up to a black sky, which instead of stars and constellations is peppered with motion detectors and fire alarms. The large trees were added to mask two support columns in the LACMA space and will not travel with the piece. The small tree was included in the original installation but with or without the trees, the presence of the rope makes it clear that this is not only a castration, but a lynching.

The history of lynching in the United States is filled with many accounts in which a black male was falsely accused of sexual assault against a white woman. This recurrent trope played into miscegenationist fears of racial mixing and was used to justify the lynching of hundreds of African American men. It is important to note that Kienholz’s figures are not depicted in classical poses but appear as if they were caught in mid-action. As if time suddenly stopped, a scene frozen by the camera’s shuttered lense. With Five Car Stud, Kienholz has created a three dimensional representation of a lynching photograph. Such images were bought and sold across the nation, and have been the subject of much scholarship over the past decade. Even the lighting of the piece suggests a lynching photograph. Five Car Stud is lit from the headlights of the vehicles that surround the figures. Lynching images taken at night were lit from flares, torches and headlights before the advent of the photographer’s flash.[1]

Stepping into the dark space, the sandy earth is unexpected in the seemingly vast darkness of the space. In order to get one’s bearings one must look into and across the beams of light in and one quickly realizes that one has becomes both voyeur and participant in the space, but to what end?

Five Car Stud was created after history of lynching in the United States had come to an end, and from his statements, and other forms of documentation, which visitors can find in the exhibition’s newly added entry foyer, Kienholz saw the piece as a visual response to the political and economic “castration” of black men in the United States.[2] That Five Car Stud was intended to raise awareness of the inequality between blacks and whites in the United States is made clear by Kienholz’s 1972 statement, “If six to one is unfair odds in my tableau, then 170 million to 20 Million is sure as hell unfair odds in my country.”[3]