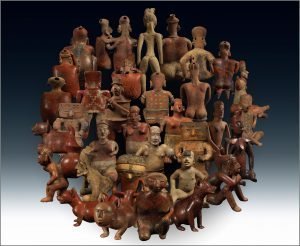 Opening May 2 through 5, 2019, Frieze New York will showcase a cross-section of work, from emerging artists to seminal figures of the 20th century alongside new exhibitions, sections and collaborations.

The section entitled Diálogos, curated by Patrick Charpenel and Susanna Temkin, will focus on the work by contemporary Latinx artists. The presentation coincides with El Museo del Barrio’s 50th anniversary and they invited a select number of galleries to present works by artists who “played a significant role in El Museo’s history,” according to one release.

For Diálogos, I created a new body of work entitled Museum Constellations as a part an ongoing exploration of historical objects. The photographic images were the result of recent forays into the collections of the Los Angeles County Museum of Art (LACMA), The Pennsylvania Academy of Fine Art (PAFA), The Louvre, and The Royal Cast Collection and Ny Carlsberg Glyptotek (both in Copenhagen) and then assembled into a series of works that use the copy (rendered in plaster or bronze), as a signifier, or clue, to engage in the larger discussion of absence and erasure that has been a central theme in  my work, writing, and teaching. In this case thinking about the ways that museum categorizations order culture.

Many of the works  in this series were assembled from historic objects and artworks that are themselves copies, rarely displayed, or were used for teaching as is often the case with plaster copies of famous works of art. With internet access to an infinite number of collections, distinguishing  an original from a copy can be  impossible. In an ever-widening field of artistic practice where appropriation, sampling, citation, and reposting have become the norm, the project strives to question the broader historical narrative.

The work also acknowledges the naming mechanisms of the institutions from which they came, and by placing them within cultural, institutional, or disciplinary constellations to draw attention to what Michel Foucault had characterized as part of the politics of the imagination.

One of the first of these constellations to emerge included the sculptural works of Auguste Rodin precisely because his embrace of modern casting techniques led to the wide-spread distribution of his work in both plaster and bronze copies. His critics worried this marked the end of art, and later scholars like Rosalind Krauss, have noted it transformation of the the myth of the unique art object through the idea of the edition or multiple.

Perhaps ironically, Rodin’s own artistic skill was questioned when he was accused of casting one of his models (the central plaster copy in white picture below), a young Belgian soldier by the name of Auguste Ney, in plaster. The final bronze version was briefly known The Vanquished but later retitled as, The Age of Bronze when it was exhibited in the Salon of 1877. The bronze was cast by Alexis Rudier in Paris and stands at the center of the Rodin constellation. 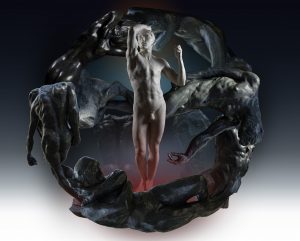 These modern reproduction technologies were also employed by academics and educators to make and distribute plaster copy casts of sculptural works from Antiquity to the Renaissance to aid in the instruction of drawing and painting, and perhaps more pointedly, to firmly establish western canons of beauty, and lay the framework for the very idea of whiteness itself. It was after all, the 18th century art historian Johann Joachim Winckelmann (1717-1768) who established the still-active myth that all classical sculpture were (or should be) white. They were not. In recent years, scholars have acknowledged that classical sculptures were often painted or polychromed. Winckelmann’s fascination with the whiteness of classical sculpture would be echoed in the academy as white plaster and marble copies began to emerge in classrooms, museums, and colleges from Mexico City to Japan over the next two centuries.  The Aphrodite constellation includes plasters that I photographed there and at PAFA, our nation’s first art academy, to highlight the nineteenth century conflation of female beauty with whiteness itself.

It has also been well-document that the wealth acquired through slave labor and colonialism contributed to the founding of some of our Nation’s most revered universities and colleges. These institutions regularly used plaster copies, not only for the instruction of drawing and painting, but for teaching the humanities as well. Indeed, such casts were used to civilize whole nations, according to Henrik Holm, the curator at the Royal Cast Collection in Copenhagen.  For Foucault, the museum was a culture machine, but for me, it is more like a highly evolved organism with all that that implies. By incorporating possessions from multiple institutions and periods I came to see this work as a critical excavation of the museum, part archivist, part witness, part teacher, part student,  I came to see the work produced as possible sites of acknowledgement and reconciliation.

In trying to establish a critical practice for thinking about the differences between absence and erasure, I tried to create a space where alterity could exist. I photograph each work but remained a visitor – neither fully part of, nor fully outside of the museum. Standing before these objects I often came to appreciate their physicality as well as the network of individuals who have contributed, in all manner of ways, to their continued existence, sometimes against incredible odds.

In Americas (large and small constellation), I assembled works from LACMA’s Ancient Americas collection. The museum’s pre-Columbian collection was built around a gift from Southern California collector Constance McCormick Fearing and a purchase from businessman Proctor Stafford. More recent additions include donations from Camilla Chandler Frost, sister of Otis Chandler, and Stephen and Claudia Muñoz-Kramer of Atlanta, has brought the collection total close to 2500 objects.

The works assembled in this image represent a point of cultural pride in terms of my ongoing search for Latinx and Latin American Art in museum collections and exhibitions, and reminds us that we must also sensitive to questions of provenance when looking at ancient works whose precise function may never be known. In a way the piece also points to the historical divide among collectors and art historians between U.S. born Latinx artists and Latin American Artists. Latinx artists have largely been excluded from the cannon of American Art.  With Constellations, I tried to create a body of work that could speak back to the intersection of these two dominant art historical narratives by using existing museum collections to invite dialog around black and brown diasporas, the history of museum display, and the study of art itself.

The mermaid, the slave, the hunchback, the toothless Mexican or aged god, the androgynous form of Shiva and Parvati, were just a few the figures that emerged from my journey deep into LACMAs encyclopedic collection. Picking up on themes of transformation and renewal, I began to imagine the recuperative potential of an artistic proposition which set out to look, not to the heavens for answers, but to a universe of objects found here on earth, and like the star-gazer searching for the origins of the universe, I began to see new constellations for our own time. Outdated ethnographic and colonial narratives became dying stars and black holes. Ideals of beauty and conquest mere points in a vast sky.  New constellations began to emerge  and I felt strengthened.

To read in Artnews

To read in Paper