Aftershocks continued in the weeks following the tragic earthquake and tsunami in Japan. Questions about radiation leaks at the Fukushima Daiichi nuclear power plant remained unanswered. In Egypt, mass protests forced President Hosni Mubarak to resign from office and triggered a wave of social and political unrest across the Middle East. In California, many wondered about the safety risks of having two nuclear power plants so near to earthquake fault lines. While recent events undoubtedly influenced my selection of images for this project in X-TRA, these objects came into being under very different circumstances. Photographed and re-presented here, they are but a small sampling from a larger project that looks to the depiction of race and the construction of whiteness. The Profiled series asks what comes after ideologies and their aesthetic manifestations have run their course. Cast, carved, burned, and broken, these are lingering shadows of people that once lived in this world, or in the imaginations of their makers, and serve to question the very idea of progress. 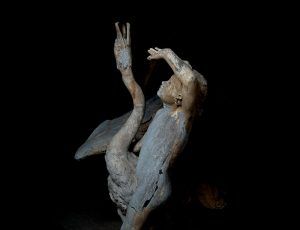 The first image is of a portrait bust, completed in 1500, of an Italian banker. It was given to the Kaiser Friedrich Museum by Prince and Princess Friedrich Karl of Hesse in the nineteenth century. The sculpture was badly damaged in the final days of the Second World War when Allied forces, under Stalin, bombed and shelled Berlin. The sculpture continues to be displayed in the museum (renamed the Bode Museum in 1956) as a reminder of the devastation caused by war. The image is paired here with a photograph of an age-worn fountain depicting a young boy with a swan. The fountain may have once delighted passersby as they strolled through the royal gardens of Frederick Wilhelm III, but when placed side by side, the images look more like a still from some vintage film of an atomic blast than sculptural works from centuries ago.

The third image is from a portrait of a Japanese woman sculpted by Malvina Hoffman for “The Races of Mankind,” an exhibition at the Field Museum that corresponded with the 1933 World’s Fair in Chicago. It is paired with fragments of limbs from other casts and sculptures executed by Hoffman for the same commission. Together, these images serve to remind us of the resilience of the human spirit, even when pitted against the devastating power of forces, both natural and man-made.