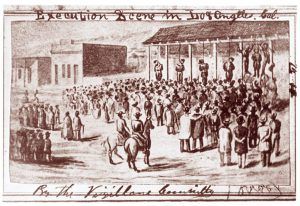 No. 8 on map (see below). Image courtesy of the Libraries of the University of Southern California

Introduction:
This walking tour revisits places and events made infamous in the first decades of the city--a period that was colored by great social, economic, and cultural unrest. The modern city has erased much of this past, but there are still places where the old city can be found, and like a war-torn battlefield, it demands recognition for its dead.

The Tongva tribe, later called the Gabrieliños, inhabited the region for over a thousand years. The combined Spanish and Mexican periods (1769 - 1850) did not even last a century. In the 1850s, the dirt roads leading out of the old Spanish plaza were still lined with many of the same adobe homes, and families, that had built them. In these early days, the plaza was little more than a dusty patch of land whose presence was intended to symbolize civilization more than embody it.

Surrounded by prominent Latino families and some of the city's most successful entrepreneurs from Europe and the "States," it remained the city's center until the 1870s when, from such noble beginnings, these same streets would house brothels, bars, and Chinese gambling houses. Race hatred would also mark the city's first decades as cultural tensions, crime, and a fledgling legal system would each inflame and infect the plaza square.

Even in the 1850s, as visitors flooded into the Bella Union Hotel to dine on a bear that had been killed in the nearby San Gabriel Mountains, others made their way to the Montgomery Saloon where Anglos crowded in to get a glimpse at a rare necklace. The necklace was made of human ears that had once belonged to some of the regions most notorious Latino bandits. The necklace's maker remains a subject of historical debate, but one can be certain that in such fierce times, no person of Mexican or Latin American descent would have risked entering an establishment where the bloody gleam of such jewels was admired. Each of these buildings stood near the intersection of Main and Arcadia Streets.

One can get to Union Station by any number of methods including bus lines, Metro's Red Line subway station, the Gold Line light rail, and Amtrak and Metrolink trains. 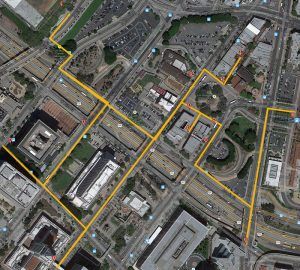 This self-guided tour begins at Union Station. Once known as the Los Angeles Union Passenger Terminal, it is located at 800 N. Alameda Avenue in downtown Los Angeles (Tour Stop 1). The father and son team of John and Donald B. Parkinson designed this landmark building. It opened its doors in 1939 and is now on the National Register of Historic Places. Its design is as remarkable as the city itself, blending the Spanish Colonial, Mission Revival, and Streamline Moderne styles with Moorish elements.

Exiting Union Station you will immediately see the old plaza. Take a sharp left at Alameda and go south one block to Aliso Street (Tour Stop 2). This is the site where in 1861 an angry mob dragged Francisco Cota up from lower Alameda, repeatedly stabbing him before they hanged him in the vicinity of this intersection. He was fifteen years old and may have killed Frau Leck, a local shopkeeper. There was no trial.

Turn around, staying on Los Angeles Street, go back over the freeway and then turn left onto Arcadia Street. At the end of the block, turn right onto North Los Angeles Street and head towards the plaza keep your eyes open for a small bronze plaque on the sidewalk that marks the site of the city's most notorious mass lynching (Tour Stop 3). Known as the Chinese Massacre of 1871, 18-24 Chinese men died here at the hands of a mob of over 300 Anglos and Latinos. The struggle lasted well into the night and when it was over at least fourteen men (and one boy) were lynched to anything that would hold the weight of a man. The original site was known as Calles de Negros or "Nigger Alley" but it was eliminated when Los Angeles Street was extended--and further altered by the construction of the 101 freeway though downtown Los Angeles. There is no official recognition of any of the lynchings in downtown Los Angeles, and only one official state marker (# 141) in Placerville, California, in spite of the over 350 documented cases in the state.

As you enter the Plaza, walk around the southern perimeter of the plaza and you will encounter the city's first firehouse at 126 Plaza Street (Tour Stop 4). This structure dates from 1884 and is open to the public. The Chinese American Museum is around the corner at 425 N. Los Angeles (Tour Stop 5), and the Pico House is just up the street at 430 N. Main (Tour Stop 6). It was built in 1869 and was the city's finest hotel. Its demise can be linked to shaky lending practices more than to its popularity. Connected to the Merced theater (1869) at 420 N. Main, the Pico House offered guests easy access to a late night supper of oysters and imported wine and practically guaranteed a celebrity sighting. In the 1860s, the city was hit with a massive drought that ended the days of cattle and ushered in an agricultural revolution of sheep herding, citrus groves, almond orchards, and vineyards.

Turning left onto N. Main (don't worry you will return to the Plaza at the end), continue three blocks south, down past Temple Street and stop mid-block, behind the Los Angeles City Hall (Tour Stop 7). This was the approximate location of the city's first courthouse and no fewer than seven men were summarily hanged or lynched in its shadow: David Brown (1855); Thomas the "Indian" (1860); Eli Chase, Boston Daimwood, José Olivas, "Wood," and "Ybarra" (1863).

Turn around and go back to Temple Street and make a left at the corner and continue to North Broadway. Near the corner of North Broadway and Temple was the original location of the Tomlinson & Griffith corral (Tour Stop 8). The high beam of its' gate, and an angry mob, claimed the life of Michael Lachenais in 1870. Some historians (Harris Newmark and others) have argued that as many as a dozen men died at this site.

Turn around again and go back to North Spring Steet and then turn left and go north to the corner of Aliso and Spring Streets. This is the approximate site of Phineas Banning's Corral (Tour Stop 9). Charles Wilkins had murdered John Sanford, a local merchant. Wilkins was later apprehended in Santa Barbara and returned to Los Angeles where a judge found him guilty of murder and he was sent to jail for sentencing on the following morning. But after the verdict, reports all suggest that a large crowd, of as many as 200 persons, suddenly charged into the courtroom and dragged the prisoner away and hanged him to a nearby corral. (Los Angeles Star,12/19/1863). Hubert Howe Bancroft also recorded the lynching as happening at Bannings's Corral (Popular Tribunals, 510). The Daily Alta give this description, "As the Sheriff was taking him from the Court House, the prisoner was seized by a crowd of excited people, and hurried to the lumber yard of Major Banning, where he was hanged to the cross piece of the large door-frame of the yard" (v.15, n. 5047, 23 dec. 1863). The Los Angeles Herald also gave Banning's Corral as the location as well, despite some accounts which claim it took place at the Tomlinson & Griffith Corral (v.27, n. 124, 7 Aug. 1887).

Continue north on Spring Street and cross over the freeway and turn left on Arcadia Street. 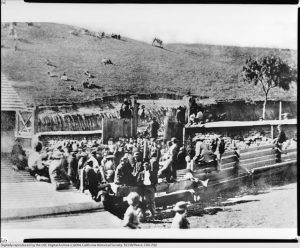 Go northwest along Arcadia Street to North Broadway and turn right. In less than 100 yards your will see a cement staircase on your left that goes up to the next street, North Hill Street. Go up the staircase and once on Hill Street, turn right and you can easily see The Fort Moore Pioneer Memorial on your left (Tour Stop 10). Once there, you can walk up the stairs to the top and you will be able to share the same view witnessed by at least nine men who were legally executed, and an additional seven who were lynched before the gathered citizenry. Those legally hanged were Reyes Feliz, Ignacio Herrera, Felipe (Félix) Alvitre, James P. Johnson, Tomas King, Luciano Tapia a.k.a. Leonardo Lopez, Syriaca Arza, Francisco Martinez, Adolfo “Rodolfo” Silvas.

Those lynched at the site were Doroteo Zabaleta, Cipriano Sandoval, and "Baramus" in 1852; Juan Flores in 1857; and Pancho Daniel in 1858. All of these men were of Mexican or Mexican American descent. The last two lynchings drew crowds that may have numbered in the thousands (see list below). The site now has a public school for the arts on it, and so access may be limited. The fact that all of the lynchings and all but two of the legal executions were of Latino men clearly supports those who insist that race was a greater factor that many historians have acknowledged.

Having taken in the view of the condemned, turn around and head back down Hill Street to the same little staircase back to N. Broadway. From Broadway, turn left back onto Arcadia Street and head back to North Main Street (2 blocks). Turn left onto North Main and head back to the Old Plaza and you will see the Old Plaza church on your left and is part of the El Pueblo de Los Angeles Historic Monument (Tour Site 11). After you have visited the old chapel, cross the street and head back into the Plaza. You will see the entrance to Olvera Street on your left (Tour Stop 12). Pico House will be facing you from across the Plaza.

The plaza has changed quite a bit since 1850 but there are places where the old city seeps out from between the cracks of this paved metropolis. In the earliest days of the city this plaza served as a bullring, a parade ground for Commodore Stockton's troops, and a dusty oval that housed the city's first water tower. Its current configuration is no less remarkable. Christine Sterling (1882-1963) had a passion for the city's past, and in the 1920s she waged a personal battle to save this historic street.

Wine Street was renamed Olvera Street in memory of the first County Judge, Agustin Olvera (d.1876) in 1877. He lived on this narrow little street, which still contains one of the oldest houses in Los Angeles. The Olvera home has long since returned to the earth from which its adobe bricks were made, but the Avila House (1818) is still standing and open to the public (13). Other historic buildings include the Pelanconi House (1855) and the Sepulveda House (1887) at 622 N. Main. This is the last stop on the tour. If you have a little extra time please stop in to América Tropical Interpretive Center and see the rooftop mural by David Alfaro Siqueiros.

Having witnessed this turbulent past, the hungry (and thirsty) explorer may wish to end their trip by visiting some of the many shops and restaurants on Olvera Street. Whether sipping an oversized margarita at La Golondrina (inside the Pelaconi House since the 1930s) or taking a rest under the massive plaza tree, I hope that you will agree that walking in the footsteps of the condemned cannot be easily forgotten. Los Angeles has always been a city of dreams, of flesh, and bone. 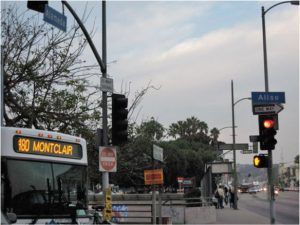 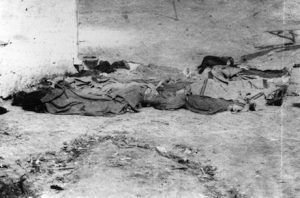