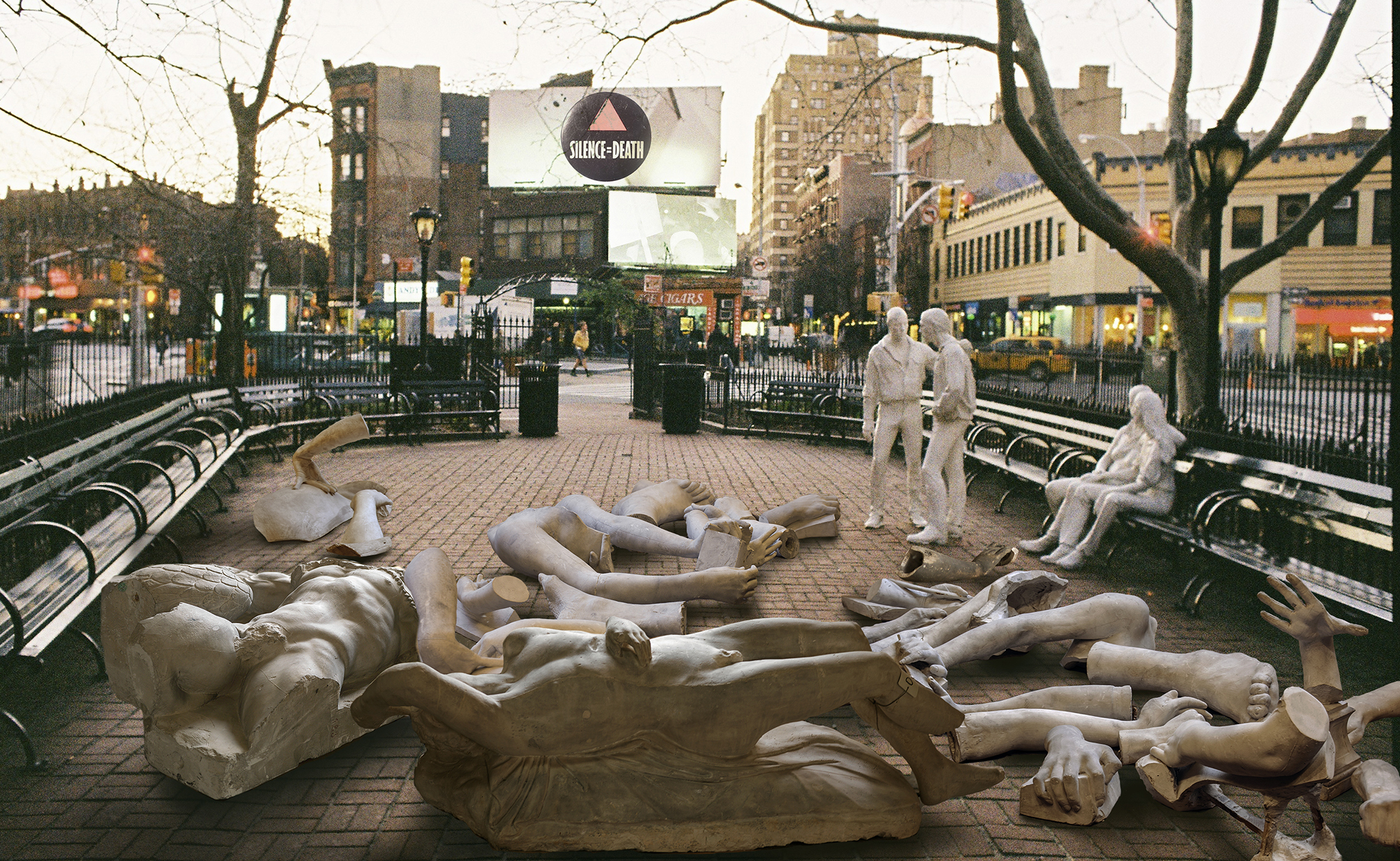 The conceit of the current MOTHA show isn’t new. At the end of 2016, Avram Finkelstein and Hugh Ryan organized a feature for Vice called “Ten Queer Reimaginings of New York’s ‘Gay Liberation Monument.’” It brought together a similar intergenerational mix of racially diverse artists who identify widely across the gender spectrum, though their prompt was slightly different, creating responses to recontextualize the Segal rather than replace it outright. The results varied from Ken Gonzales-Day’s proposal to scatter sculptural corpses around the park to Carrie Moyer’s and Sheila Pepe’s photo-play satire of today’s middle-class lesbian life.

Before giving artists this task, Finkelstein had been thinking about how to reframe “Gay Liberation” for a long time. As a member of the collective that created the iconic “Silence=Death” poster, he envisioned a counter-monument back when the Segal was first installed. Between the sculpture’s commission in 1979, and its eventual placement in the park in 1992, AIDS had ravaged New York City and radicalized its queer communities. The white cast figures now seemed like ghosts, elegiac, and to AIDS activists, resigned. Finkelstein’s idea was for a kind of ACT UP monument: turning the signature pink triangle from “Silence=Death” into a pink triangular obelisk. The collective sent letters out to the business owners flanking the park asking if they’d support the intervention — there was no interest.

Even with its fatal political flaw, it’s important to recognize the virtues of Segal’s sculpture. Life casting is an extremely basic way of making an object by creating a mold from a real thing, removing it to leave a hollow negative, and then filling it with new material to create a copy. The results are both direct and indirect simultaneously, linked through an unbroken chain of touches. Segal developed a process of wrapping subjects in strips of plaster-drenched cloth, clinging tightly to the body through their clothes — aping the effect of fabrics in Hellenistic marbles without their preternatural grace. With human figures, the life cast displaces the same volume as a body, and we respond to that on a physical level, uncannily, because we know the living original is gone. Bodies change and die, but the cast remains, a record of someone who once was, at a specific point in time. The choice to paint them white further separates these sculptures from the life, even as they bleed seamlessly into the surrounding world — sitting or standing in the same place you are, without plinth or barrier. (The bench that curves around the park is also a part of the sculpture.) The choice of color relates to his process of plaster casting, but it also feels haunted, making you think of people who were alive and now aren’t, observing the bodies of everyone else in the park doing their own thing, and imagining who has been there before. As a further intervention into the rhetoric of monuments, these figures are just living their lives, being together, without doing anything heroic — a gentle tableaux you can walk into. It becomes part of your life. In its way this enacts a utopian ideal, where queer people are just in the world like everyone else. It’s fascinating to see how often people touch them, which is constantly — mostly affectionately, sometimes lewdly, though generally it’s just a gentle laying on of hands the way the figures do to each other. All of this makes “Gay Liberation” one of the most effective public art works in New York, and for its clarity and subtlety, one of the best sculptures Segal ever made.

Jonathan Kuhn, current director of Art and Antiquities for the city of New York, oversaw the installation a year after starting his new job in 1991. “One of the biggest challenges is realizing something in physical form that sustains us, has impact, and is of the stature of the subject being commemorated,” he says, “None will be perfect. We cannot possibly ask any work of art to convey all the complex emotions we have about a person, place, event, or movement.” He tells me about the shifts in perception around it, that by 1992 it was contextualized by AIDS, which was not part of its intention when it was made in 1979; it then seemed to embody the legalization of gay marriage in 2015; after the Orlando nightclub shooting in 2016, it became a shrine, surrounded with flowers, candles, and signs. “We assume with any monument that its creation represents a specific moment in time,” he says, “and it’s understood that it stays stable, literally, when the world around it changes.” As a special subcategory of public art, monuments have a special if doomed task of coalescing publics around them — embodying our shared civic values. Of course, in an America as bitterly divided as ours, the idea of a “monument” — to anything, in any form — is all but unthinkable.

As a point of comparison, take the “New York City AIDS Memorial,” which opened a short walk up Seventh Avenue from the Stonewall Inn across from what was St. Vincent’s hospital, which took in the earliest AIDS cases when other hospitals refused. St. Vincent’s set up the first AIDS ward in the city, and the second in the nation, in 1984, and remained ground zero for the plague — it’s where the angel bursts through the roof in Angels in America.By the time the hospital was demolished in 2010, to make way for very expensive condos, the once inexplicably horrific disease had become largely controllable through drug therapy, and the condo developer agreed to also pay to remake the park as an AIDS memorial, which is a powerful gesture, even as the crisis itself is ongoing.

For the memorial, the architecture firm Studio AI designed an off-white trellislike canopy of interlinked triangles. The shape is intended as an homage to the “Silence=Death” image that became an emblem of ACT UPand AIDS activism more broadly. ACT UP’s solid pink equilateral reclaimed the Nazi concentration-camp signifier identifying homosexuals. The color itself was specific, consciously punched-up by the collective to be a strong, saturated magenta. The use of triangles in the canopy, which includes several non-equilateral varieties, uncoupled from color, is drained of any symbolic meaning: It feels like tasteful urban furniture, quite the opposite of what the AIDS activists were fighting for, and the methods they deployed so effectively.

The same goes for the text engraved on the pavers beneath it, for which artist Jenny Holzer excerpted Walt Whitman’s “Song of Myself.” The choice of poem, however beautiful, is a head-scratcher: Were there no artists or writers affected by the AIDS crisis who could offer a more appropriate text? Nothing by Tim Dlugos or Essex Hemphill or Karen Finley or Audre Lordewas fitting, or more specifically relevant for honoring the creative sectors of New York City decimated by the disease? More problematic is the way the text is arranged in a tight concentric circle, which makes it impossible to sustain reading from one line to the next — the result is a visual murmur, a pattern, like the triangles enclosing it. Using a poem should be dictated by the power of those exact words, and made legible for that reason — they are being set in stone after all. The entire effect is uninspired, like a Maya Linknockoff, thinking of her “Civil Rights Memorial” (1989) or “Women’s Table” (1993), both of which avoid these pitfalls through the precision of language and its relation to form. But it is probably what the condo developers wanted: something vague in a corporate way, nothing too angry, sad, or specific that might disturb property values.

Much of the criticism leveled at Segal’s “Gay Liberation” relates to his use of figures — and using specific people to symbolize an abstraction will always cause trouble. It’s undeniable how powerful it would be to see a black trans women “just living” in the utopian future it imagines. The prevailing discourse around queer representation, however, skews heavily toward the safety of abstraction, and as the “New York AIDS Memorial” shows, abstraction on its own isn’t the promised panacea. What is missing from the rigorous political critique that drives the MOTHA proposals, or the imperatives that produced the NYC AIDS memorial, is an equally rigorous engagement with aesthetic form. It’s the problem of “art” in public art, which is too often disregarded as a luxury we cannot afford, instead of being understood as the essential reality of how any of these interventions materialize, communicate, or make meaning at all. Monuments are one way we anchor the fluidity of our cultural memory, even as our needs for them are always shifting, invalidating, and revising their meanings. In a city like New York, where public space is increasingly dominated by private capital, there is a new urgency to think about how we can represent and remember human life within it. Artists must relentlessly push the boundaries of this conversation, finding new ways to reconcile the broken halves of the illusory promise of “public art.”

Read it on Vulture.com