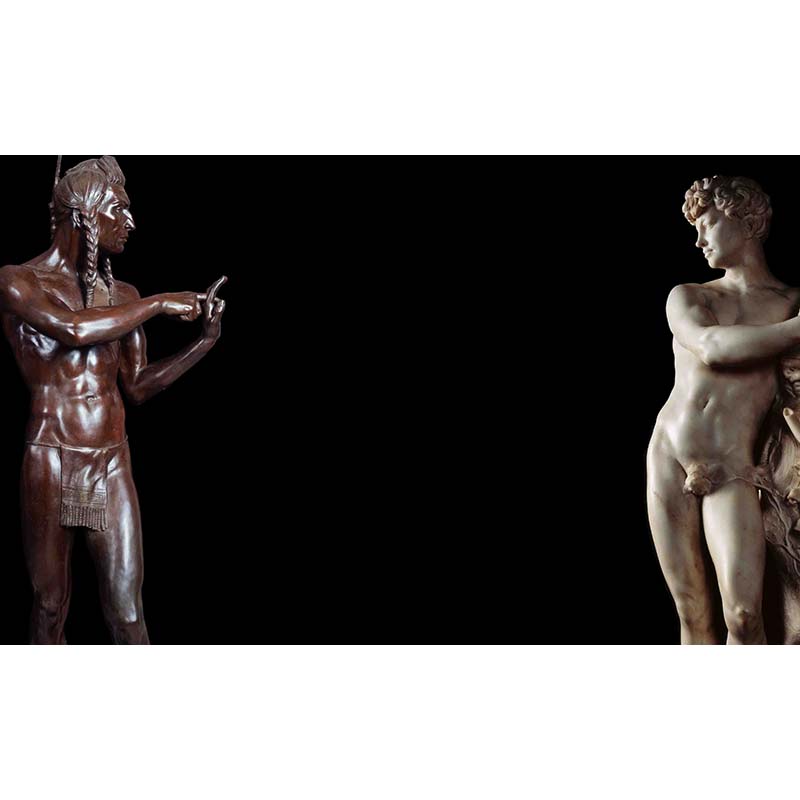 …What Gonzales-Day records is a much larger form of racial profiling, though, than the sort practiced by law-enforcement personnel. For centuries, Western art has operated under a certain set of assumptions about what did, and did not, constitute beauty. Those assumptions simultaneously shaped and reflected even larger assumptions about human value. The fact that the classically-inspired statuary was considered art, while renderings of African, Native American, and other non-Western people were assigned to the category of anthropology, speaks volumes. Seeing two such images juxtaposed within the same frame is to witness a cross-cultural dialogue all the more eloquent for its silence.

The statues are such accurate likenesses, one marvels at the skillfulness of their makers. Yet that accuracy bears the relationship to life that a corpse does. Gonzales-Day’s subjects are so dead, so artificial. Even forgetting the flesh-and-blood questions his work raises, it reminds us how radically beliefs about artistic beauty have changed. Idealized, marmoreal beauty seems to contemporary taste more banal than beautiful, a kind of glorified embalming. The liveliness of Gonzales-Day’s images owes everything to his pairings within them.

That liveliness can be comic at times. A Blackfoot tribesman with crossed index fingers seems to be chastising the Greek faun he’s staring at. The faun’s come-hither posture seems to justify the chastisement. A further joke is how this image plays into another longstanding Western belief, that of the Noble Savage.

The incongruity of Gonzales-Day’s images makes comedy a near-constant in the show. Yet those same images become heartbreaking when one considers the centuries of human history deformed by the belief system that went into the making of these statues. Consider the two figures in “Untitled (Henry Weekes, Bust of an African Woman and Jean Baptiste Pigalle, Bust of Mme. Adelaide Julie Marleau de Neuville, nee Garnier d’Isle).’’ That the sculptor’s models could have shared the same space on a footing of equality was unthinkable at the time. The closest thing to a relationship that might have existed between them is if Pigalle’s model – or, rather, client – had owned Weekes’s. Furthermore, note that we can identify one subject by name (let alone such a lengthy name), but not the other. There’s a reason “title’’ and “entitled’’ are cognate.