The Bone-Grass Boy: The Secret Banks of the Conejos River is a conceptually driven project that manifests itself in two ways: one, as a literary trope of the frontier novel of the late nineteenth century, and two, as a digitally constructed artifact whose material existence stands in for the historical absence of such texts. Not surprisingly, such novels often depicted Native and Latino inhabitants as ridiculous personages encountered on an otherwise naturalized conquest of the West. Bone-Grass Boy is their nemesis. Set during the U.S.-Mexican War (1846–48), a period that saw bitter struggles between cultures, the work depicts the effects of the annexation of the Southwest on two main characters. Ramoncita is a Native/Latina “two-spirit person”1 who, the reader learns, is forced to kill the rancher to whom she has been indentured. Nepomuceno, a New Mexican soldier, ﬁghts on the Mexican side, only to have to sneak back to his homeland, now America. As a project, Bone-Grass Boy makes use of new technologies in an attempt to construct what might be thought of as a ﬁctitious “nevermade.” It thus plays off Marcel Duchamp’s now archetypal readymades such as Fountain (1917), a signed urinal that was initially rejected for its conceptual illegibility. Without entering into the debate surrounding Duchamp’s initial intentions, I must admit that Bone-Grass Boy’s digitally manipulated images and pages appear decidedly premodern—precisely because their illusion is so complete. The artistic intervention is a conceptual one. Questions of appearance and style were openly rejected by the most idealistic of the avant-garde artists, whose primary goal was to undermine the status quo of the bourgeoisie in the hopes of effecting cultural change. Indeed, this goal underlies many of the artistic movements of the twentieth century. My reversal—that is to say, the creation of an object that was never made, but that is given the appearance of a historical document—offers a subtle and humorous critique of the avant-garde appropriation of the everyday object, which, it could be argued, made use of objects that, at the most basic level, retained the historical and material privileges of Western culture. Because of the opacity of cultural difference embodied within the images and the text, some might argue that Bone-Grass Boy should not be seen as a photographic project at all, but Bone-Grass Boy’s performative and narrative intervention intentionally employs a conceptual practice that strives to challenge exhausted notions of race, nation, gender, and aesthetics. 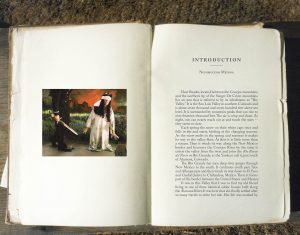