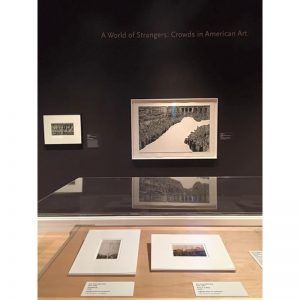 “‘A World of Strangers’ begins with an evocative photograph, Crowded Pier by Moonlight, Arverne, Long Island, New York, made around 1910. The picture, by Karl Struss, a photographer who later became a successful cinematographer, depicts people on a pier at night who seem to meld with the moon’s afterglow. The exhibition ends with three pieces from Ken Gonzales-Day’s chilling Erased Lynching, a photographic series from 2006 that casts a stark light on communities gathered to witness lynchings, and in one case what appears to be a military execution. The works by Struss and Gonzales-Day, separated by nearly a century, demonstrate two of the various ways in which artists convey the anonymity of crowds, in one case romantic and sublime, and in the other horrific.

Gonzales-Day’s East First Street (Lightjet mounted to cardstock) originated from a historical photograph, but was altered in 2006, with the victim digitally “erased.” The resulting work sharpens the focus on the community that gathered to watch the spectacle. Among those in the crowd is a central figure that, perhaps self-consciously, is caught looking back at the camera as the photograph is taken. “In a crowd, people are sometimes compelled to act in ways they would not do otherwise,” said James Glisson, Bradford and Christine Mishler Assistant Curator of American Art at The Huntington and curator of the exhibition. For example, in Weegee’s First Murder (ca. 1950), the documentary-style photograph captures a gang of curious children and adults joined together to stare at a gruesome crime scene.”