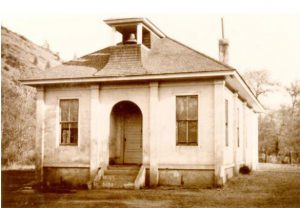 Local history is full of stories that can be hard to verify, and telling truth from legend can be tricky. One story in particular has been perplexing history buffs in Siskiyou County for over 20 years. JPR’s Mitchell Johnson brings us this tale of a reported lynching, a missing newspaper, and an alleged coverup.

In 1994, a man named Edward Begley wrote to the Siskiyou County Historical Society. He said that nearly 50 years earlier, in 1947, he saw a black man lynched in front of the one-room school house in Callahan, California. He was in first grade at the time.

He writes: “On the morning of January 6th, 1947, all of us students arrived at school to see a man hanging from a telephone pole across the road from the school.”

According to Begley’s letter, the lynching got covered up. He says his teacher told the whole class not to tell anyone about what they saw. He also says that a local paper called the Western Sentinel reported on the crime, but all the copies of the issue were destroyed by local authorities who he says were involved in the murder.

But not everyone who lived in Callahan in those days remembers it that way. Take Shirley Gilmore …

“Well there was no paved roads I can tell you that. And there wasn’t very many cars that came through Callahan at the time that I grew up.”

Gilmore is a lifelong Callahan resident, who attended that one room school in the 1940s, at the same time Begley did. She says people have asked her about Begley’s story throughout the years. But she doesn’t remember a lynching.

“No,” she says. “No, and I’ve talked to other people around here that might know something and nobody knows of anything like that that happened. So I don’t know why this story has persisted. Because I know it didn’t happen.”

Several other Callahan residents also told me that it didn’t happen. In fact, Ed Begley’s letter, and some online posts he wrote, seem to be the only evidence of the alleged lynching. Begley died 10 years ago, and the Callahan school closed down in the 70s.

But one piece of Begley’s story does hold up. The Western Sentinel, the newspaper he says was destroyed? Every available archive of the paper is missing the issue from January 10th, 1947– the one he says would have reported on the lynching.

Were all these copies destroyed in a coverup like Begley claims?

Michael Begley, Ed’s son, is skeptical. He says that his dad was prone to exaggeration.

“He tended to go on the conspiracy theorist route sometimes,” the younger Begley says. “I think he might have remembered something that just didn’t happen. Or maybe he saw something that he misinterpreted when he was young.”

But even if the story doesn’t appear to be true, it’s had a remarkable afterlife. There are several online articles about it, and even one novel– available as an e-book on Amazon. The Callahan residents I spoke to had all been asked about it over the years.

Ken Gonzales-Day is a historian, and the author of the book Lynching in California. He included the Callahan lynching story in his book as an unconfirmed case. And he says that people don’t often realize how common racist violence was in the history of the Western US.

“I wanted to write a book to clearly demonstrate racialized violence was active in California, and that it wasn’t just some sort of race-neutral wild-west frontier sort of activity, which is what many people thought at the time,” he says.

Gonzales-Day compiled a list of lynchings in California’s history– each of which he could confirm with at least two sources. And he ended up with over 350, more than 7 times more than previous official estimates. And almost all those lynchings, like in the American South, targeted people of color.

“Latinos, Native Americans, Chinese, Filipinos,” Gonzales-Day says. “Other communities of color were victimized in the same proportions as African Americans were in the deep South.”

Gonzales-Day is used to stories about racial violence in the west being erased, or covered up. But how should we think about this story, where it’s likely that the lynching in Callahan never happened? For Gonzales-Day, even a tall tale like Begley’s says a lot about the history of the West.

“The kinds of histories of racialized violence are certainly those of America. And a lot of the California histories were sort of a fantasy idea of the Wild West. Kind of creation stories,” he says.

At the end of the day, we don’t know what that newspaper printed, if anything. We don’t know why Ed Begley wrote that letter. But whether the tragic event actually happened or not, perhaps the uncanny persistence of the story tells us something; that it’s possible a lynching like this could have taken place, and could’ve been covered up.

And that suggests an uncomfortable truth about the history of racism in our region.

To listen to the story on JPR click here.