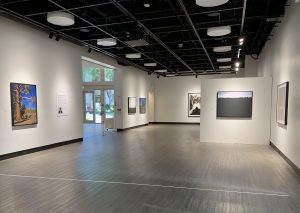 Santa Clara University (SCU), a flag bearer in an ongoing crusade for social justice, regularly raises awareness of social issues through the arts. A free exhibition of 25 Erased Lynching and California Hang Tree photos by Los Angeles-based artist Ken Gonzales-Day is on view through Jan. 24 in the Gallery of the Art and Art History building.

“Ken Gonzales-Day is an artist who makes work as an act of compassion,” said exhibition curator Renee Billingslea, a senior lecturer in the Department of Art and Art History.

“He is also a storyteller, providing the viewer with an opportunity to enter the gallery to learn about a difficult subject without being shocked or turned off and to come to their own conclusions — a difficult balance for an artist.”

For his Erased Lynching series, begun in 2002, Gonzales-Day found postcards and archival photos of lynchings. Then he removed the lynching victims and ropes, instead focusing the viewer’s attention on the jeering, smiling mobs of onlookers.

Most accounts of U.S. lynchings focus on the hanging of African-Americans in the South. With his Searching for California Hang Trees photo series, Gonzales-Day exposes the forgotten history of lynching in the West.

In his 2006 book Lynching in the West: 1850-1935, Gonzales-Day focuses on lynching in California, where he uncovered 350 instances of mob lynchings during those years. Most victims were Latinx, followed by Native- and Asian-Americans, murdered because of their race.

Gonzales-Day has stated that these two photo projects were “sparked by anti-immigration/anti-Latinx rhetoric that led to an increase in vigilante activity against Mexican and other immigrants along the U.S./Mexican border in the early 2000s.”

“The lynching that occurred in the United States is a difficult topic to discuss and is usually just touched upon while in secondary school,” said Billingslea. “It is important to learn about this part of our history as a way to understand why racism exists today and as a way to stop it from happening again.”

In 2002, Gonzales-Day began locating and visiting the sites — as best he could pinpoint them — of the 350 California lynchings. His photographs of California Native Oaks, bear, as was written in 1851-1852, “silent [witness] to the mobs and vigilantes that passed beneath their green-leafed gallows.”

The Gonzales-Day exhibition opened Nov.1 at the Society for Photographic Education Western Regional Conference at SCU, where Gonzales-Day was keynote speaker.

At the City of Santa Clara’s Triton Museum of Art, Billingslea’s own photo-documentation project Ten Japanese-American Concentration Camps launches with a reception Feb. 7, 6 p.m. – 8 p.m. It is on view through April 19.

“The Arts can play an important role in teaching issues of social justice by providing the perspective of the artist and a unique experience for the viewer,” said Billingslea.